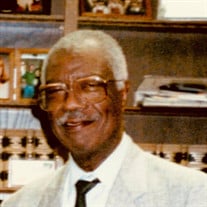 On December 7, 1935, the late Hunter and Ada Reed welcomes a third son, Willie Frank Reed into their family. Frank had four siblings John, Leroy, Charles and Billy, all of whom preceded him in death. He was reared in Jackson, TN and graduated from Merry High School. Frank spent four years in the U. S. Army and upon his return to Jackson he began his higher education journey by attending Lane College. He was a proud graduate of Lane College where he was a Music Major. Frank was a musician at heart, and he played in the local night life hot spots with the Phillip Reynolds Orchestra and was a part of the recordings that are included in the Rock-a-Billy Hall of Fame. He played with Phillip Reynolds, Grady Carter, John McClellan, Frank Ballard, Big Red Matthews and many others. Frank began his teaching career as the band director at Peabody High School in Trenton, Tennessee. As his career moved him into the private sector joined Eastern Airlines as one of its first African American executives. grandchildren in Miami, FL. Until his health failed, he was an active member of New St. Luke Missionary Baptist Church. He was also preceded in death by one son: Michael Reed. He was married to the former Kaye Bledsoe and then later married Rebecca Reid He is survived by a wife: Rebecca Reed. He will be fondly remembered by his two children: Karen Reed of Jackson, Tennessee and Gregory (Tammy) Reed of Miami, Florida; three grandchildren and three great grandchildren in Miami, Florida; four stepdaughters, Rebecca Kwaben (Houston, TX), Monica Greer (Deandre) (Jackson, TN), Jessica Palmer (Anthony) Jackson, TN, and Veronica (Aden) Jackson, TN; two stepsons, Willie May (Tammy) Jackson, TN and Donald Campbell (Elizabeth) Jackson, TN. He will be fondly remembered by two favorite cousins, Martha Jane (Howard) White (Howard) of Jackson, TN and Cousin Bernice Christopher: one step granddaughter and one step grandson.

On December 7, 1935, the late Hunter and Ada Reed welcomes a third son, Willie Frank Reed into their family. Frank had four siblings John, Leroy, Charles and Billy, all of whom preceded him in death. He was reared in Jackson, TN and graduated... View Obituary & Service Information

The family of Mr. Willie Frank Reed created this Life Tributes page to make it easy to share your memories.

Send flowers to the Reed family.