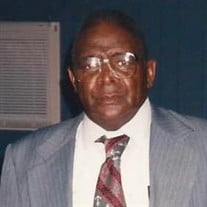 Willie D. Chapman was born to late Mary Sue and Willie D. Chapman, Sr. on May 9, 1927 in Denmark, Tennessee. He was preceded in death by sisters, Mary Louise Hoyle and Lizzie Mae Patrick, a brother, R.B. (Mack) Chapman, and brother-in-law, Lloyd Patrick. He transitioned peacefully from this earthly life to his eternal reward on Thursday, July 21, 2016. He attended the public schools of Madison County. At an early age, he professed a hope in Christ and united with the St. John #2 Missionary Baptist Church, where he served until his health began to fail. He loved the Lord, his church and made friends with all he came in contact with. He served in many capacities in the church and community. He served in the Usher Board, served on the Cemetery and Grave committee. He was a member of the West Madison Senior Citizens Center where he help organized the Men’s Night Out Fellowship. He was employed with the Waste Management Division for many years before retirement. Willie D. was married toIda Mae Rogers and to this union six children was born. Those left to cherish his memories are a loving and devoted wife, Ida Mae; children, Willie D. Jr., Sandra, Graylin, Marvin (Cathy) Chapman, Teresa Campbell, Prentis (Josephine) Thompson, Anita and Tracye Chapman, a sister, Nevada Spivey,Jackson,TN; abeloved brother-in-law, Alvin Rogers;sisters-in-law, Verline Reid & Emma Mae Rogers, St. Louis, MO;. ten grandchildren and ten great-grandchildren;a host of nieces and nephews, as well as other relatives and friends.

The family of Mr. Willie D. Chapman created this Life Tributes page to make it easy to share your memories.

Send flowers to the Chapman family.