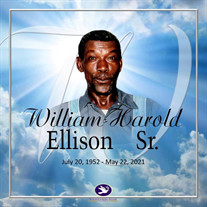 William Harold as he is most affectionately known throughout the community was born on July 20, 1952 to Floyd Ellison and Vinnie Fuller Ellison in Jackson-Madison County Tennessee. He passed away on Saturday, May 22, 2021 at the age of 68,... View Obituary & Service Information

The family of Mr. William Harold Ellison Sr. created this Life Tributes page to make it easy to share your memories.

William Harold as he is most affectionately known throughout...

Send flowers to the Ellison family.