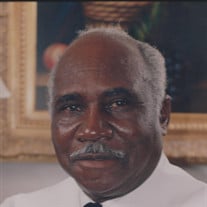 In a small frame farm house in Medon, Tennessee, Walter Lewis McBride was born on May 6, 1926. He was the sixth of thirteen children born to Mose Walter McBride and Velma Almeda Croom McBride. While growing up, he attended the Marshall Chapel... View Obituary & Service Information

The family of Bishop Walter L. McBride created this Life Tributes page to make it easy to share your memories.

Send flowers to the McBride family.