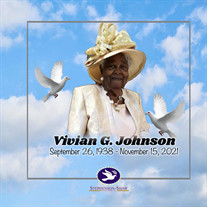 Vivian Geneal Newbern Johnson was born on September 26, 1938. She was the oldest child of the late Mary Francis Hoyle Newbern Shaw and the late Hunter T Newbern. She departed this life the morning of November 15, 2021, at Jackson-Madison County General Hospital of Jackson, Tennessee She started her education in the Madison County School System. She later finished her secondary education in Decatur County where she met the love of her life John Bradley Johnson, and were married on June 6, 1958, with this union they produced four children. She was a devout Christian, professing her life to Christ at an early age. She held many church positions throughout her life stemming from Sunday School Teacher, Ushering, sung in the choir, Deaconess and later joined the Mother’s Board. She has held several jobs during her life as cashier CNA, Seamstress, and assembly worker where she retired from Johnson Control in Lexington, Tennessee. She was a lifetime member of Rosebud Chapter 223 Order of The Eastern Star. She loved quilting, crafting and ceramics. She was a loving and giving person who never met a stranger. If you went to her house, she would either put you to work by cleaning closets, cabinets, working in someone’s garden and or tree. She will always send you home with something to eat. She also liked to listen and tell jokes. She was preceded in death by her husband, parents, one sister: Evelyn Owens; three brothers: Joe Daniel Shaw, Michael Shaw, and Greg Shaw; three grandchildren: Veronica Buck, Deva Christine Buck, Tharron E. Pollard. She leaves to cherish her memory her children: Nerissa Geraldine (Bobby) Deberry, Ivadella Christine (Ben) Buck, Anita Pearl (Conrad) Long of Oakland, Tennessee and John Terrance Johnson of Antioch, Tennessee; siblings: Hunter Richard Newbern of Lexington, Tennessee, Thomas Shaw of Chicago, Illinois, Eva (Joe) Stovall of Memphis, Tennessee, Robert Shaw of Nashville, Tennessee, Samuel Shaw of Union City, Tennessee, James Shaw, Charles (Deborah) Shaw, Mary Frances Shaw and Ricky Shaw all of Jackson, Tennessee; a beloved cousin: Joanne Merry; her in-laws: William (Nelma Sue) Johnson, Geneva (Lynn) Brown, James (Bennie Sue) Johnson and Edna Roberts all of Lexington, Tennessee. Four grandchildren, seven great-grandchildren, and a host of other relatives and friends.

Vivian Geneal Newbern Johnson was born on September 26, 1938. She was the oldest child of the late Mary Francis Hoyle Newbern Shaw and the late Hunter T Newbern. She departed this life the morning of November 15, 2021, at Jackson-Madison County... View Obituary & Service Information

The family of Mrs. Vivian G. Johnson created this Life Tributes page to make it easy to share your memories.