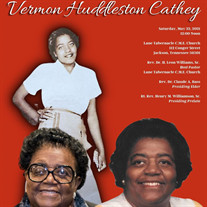 Vermon Huddleston Cathey was born on October 15, 1931 to Hoyie and Beaulah Vann Huddleston in Bells, Tennessee. She was one of three children. she joined the “great cloud of witnesses” and took her eternal rest on May 12, 2021. She received her early education in Bells, TN. She was baptized and raised in the gospel at Bells Chapel Baptist Church where she served as a church secretary. During her teen years, she went to Vashon High School in St. Louis MO and resided with her paternal grandparents, Carlos and Sadie Huddleston. She always said some of her best years were spent there with her grandparents, an aunt who was like a sister, and doting uncles. Her faith was strengthened with the family at the Rising Star Baptist Church where she sang in the Rising Star choir. As an adult she joined Lane Tabernacle C.M.E. Church where she faithfully served in many roles including church secretary, stewardess, usher, missionary board president, and member of the Carnation Club for more than 60 years. She married her heart and soul mate, Marvin Cathey, on November 1, 1947. They met as children and developed into a truly admirable love story. She was his “Queen” for 65 years until his death in 2013. As a young wife and mother, she completed her high school education after the birth of her first child. She continued to serve as a dutiful wife and mother for several years until she decided to complete her dream to become a teacher. While rearing her children, she attended Lane College. She graduated in 1964 with a B.S. in Elementary Education with Summa Cum Laude honors. Her first teaching assignment after graduation was at the St. John School, located in the community where she was reared and had many relatives and friends. She went on to teach and impact countless number of students in Jackson-Madison County at Nova and Denmark Elementary Schools for 28 years. She never lost her stride as a faithful wife, mother, and active participant in serving her community. She was inducted into Delta Sigma Theta Sorority, Inc., a public service organization, in 1965. She was a Golden Life Member and financially supported the organization’s goals and mission until her death. She served as a Cub Scout Den mother, school PTA member, piano teacher, pseudo-Mom, neighbor and friend to anyone who would listen and learn from someone who had been blessed, even with obstacles which delayed, but did not prevent the accomplishment of her life goals. She was preceded in death by her parents, sister, and husband. In lieu of flowers, the family requests donations to be made in honor of Vermon Huddleston Cathey to the Lane Tabernacle C.M.E. Carnation Club, 112 Conger Street, Jackson, TN 38301.

Vermon Huddleston Cathey was born on October 15, 1931 to Hoyie and Beaulah Vann Huddleston in Bells, Tennessee. She was one of three children. she joined the &#8220;great cloud of witnesses&#8221; and took her eternal rest on May 12, 2021. She... View Obituary & Service Information

The family of Mrs. Vermon Huddleston Cathey created this Life Tributes page to make it easy to share your memories.

Send flowers to the Cathey family.