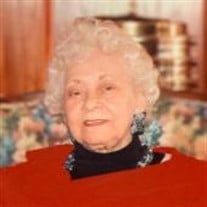 Vera Paralee Shaw Dunnings was born April 7, 1929 in Brownsville, TN to the late Earl and Pauline Bond Shaw and she was one of ten children. Her brothers Leslie, Raymond, Cloy and two sisters Flossie and Earline all preceded her in death. She was a loving wife, to the late Dr. Ophie Dunnings, DDS of Staunton, VA for 49 years. After his death, she moved to Decatur, IL to be closer to her siblings. She was baptized at an early age at Beech Grove Church of Christ in Brownsville, TN and later placed membership at Jefferson Street in Nashville, TN. While living in Staunton, VA, she was a faithful member of the Mountain View congregation, where she worked diligently with the youth and ladies’ bible school classes. Upon moving to Decatur, she placed membership at the Sunnyside Road Church of Christ where she remained faithful until her health began to fail. Paralee graduated from Carver High School, formerly Haywood County Training Center in Brownsville, TN and later attended Tennessee State University. She did clerical work at TSU, and later continued as an administrative assistant at EIDuPont Company in Delaware. She was later a dental hygienist at her husband’s dental practice in Virginia. She also enjoyed traveling to many dental conferences with her husband throughout the United States. Anyone that knew Paralee, will remember her infectious smile and love for her friends and family. She was affectionally known as “Aunnie” to her many nieces and nephews. Paralee’s memory will be cherished by her four siblings: Beatrice Fuller of Nashville, TN, Roger Shaw of Decatur, IL, Flora Lee of Germantown, TN and Armanda Teamer Johnson of St. Charles, MO; and a host of nieces, locally a special niece Angela Shaw, and a host of nephews, cousins and friends who will forever hold a special place in their hearts as she held them in hers.

Vera Paralee Shaw Dunnings was born April 7, 1929 in Brownsville, TN to the late Earl and Pauline Bond Shaw and she was one of ten children. Her brothers Leslie, Raymond, Cloy and two sisters Flossie and Earline all preceded her in death. She... View Obituary & Service Information

The family of Mrs. Vera Paralee Shaw Dunnings created this Life Tributes page to make it easy to share your memories.

Send flowers to the Dunnings family.