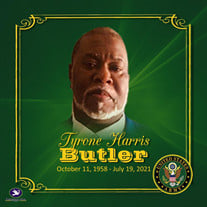 Tyrone Harris Butler was born on October 11, 1958 in Humboldt, Tennessee. Tyrone departed from this life into eternal life on Monday, July 19, 2021. God sent his death angel to Mt. Vernon, Indiana to guide him on home to be with our Lord and Savior Jesus Christ. Tyrone was born and raised in Humboldt, Tennessee. He was the only son and the 2nd child of the late Eula V. Butler. Tyrone “Ty” was raised by his grandparents the late O. D. Butler, Sr. and Viola (Harris) Butler. Tyrone graduated from Gadsden High School in Gadsden, Tennessee with the graduating class of 1977. At the age of 18, Tyrone joined the United States Army and proudly served his country for four years. Tyrone professed his faith in Christ at an early age and joined the Antioch Missionary Baptist Church, where he attended faithfully until he joined the Army and moved out-of-state. Tyrone returned to civilian life where he grew up in Humboldt, Tennessee. He moved a few times including to Dayton, Ohio, Henderson, Kentucky and Evansville, Indiana before settling down in Mt. Vernon, Indiana. Tyrone was a talker, he never met a stranger! He was a kindhearted person who loved to laugh! He enjoyed cooking all that stuff that he shouldn’t have been eating and would often call his sister to say “girl what did you put in that there stuff to make it taste so good! 😊 Tyrone loved and enjoyed his family and loved reminiscing about growing up with his family in Humboldt! When we all got together, it was like being at a comedy show!!! Tyrone was preceded in death by his Mother, Eula V. Butler and both grandparents O. D. Butler Sr. and Viola Harris Butler, family that he was raised with; Linda F. Butler Brown-Warren, O. D. Butler, Jr. "Brother", Ardella Butler Collins "Della", Arthur "Lee" Butler, Sr., Johnnie M. Johnson, Louise Butler Watts, Joe Larry Butler and Elizabeth "Liz" Butler Walker. He leaves to cherish his memory: His sisters Gloria A. Butler of Dayton, Ohio and Wesley Michelle Butler of Memphis, Tennessee. Two nephews Damon Marcel Murphy of Baltimore, Maryland and Justin Romiero Butler of Memphis, Tennessee. One great nephew Christion Shamar Murphy and four great nieces Inikeya, Deaja, Jade and Ebony. Other family that he was raised with; Benny "Ray" (Mary) Butler of Louisville, KY; Lawrence Edward (Diane) Butler of Henderson, KY, Ozzie Butler Brown-Groomes of Jackson, TN, Geraldine Butler Baldwin Mask "Gerald" of Phoenix, AZ, Brenda J. Butler of Humboldt, TN and Debra Mayo Johnson of Columbus, Ohio. A special Aunt: Arnell Butler. Tyrone also leaves to fondly remember him, a host of other nieces, nephews, cousins, numerous friends and extended family. We are thankful for the precious memories of Tyrone and will truly, truly miss him! Rest in Peace Tyrone!

Tyrone Harris Butler was born on October 11, 1958 in Humboldt, Tennessee. Tyrone departed from this life into eternal life on Monday, July 19, 2021. God sent his death angel to Mt. Vernon, Indiana to guide him on home to be with our Lord and... View Obituary & Service Information

The family of Mr. Tyrone Harris Butler created this Life Tributes page to make it easy to share your memories.

Send flowers to the Butler family.