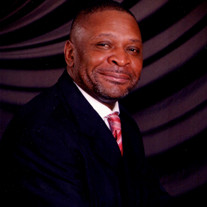 Mr. Tony Victor House was born on June 12, 1961 in Jackson, TN to the late L. G. Golden and Maggie Bell Smith. He gave his life to Christ in January 2011 and was baptized at New St. Luke Missionary Baptist Church, where he served in the Male Choir and was a member of the Safety Team until his health began to decline. He graduated from Berkeley High School in Ferguson, Missouri in 1979. Afterwards, he went into the United States Army, of which he served for 14 years. While in the Army, he attended Georgia Tech and served in the Desert Storm War. He later worked as a Supervisor for various manufacturing companies and worked for Vorteq Coil Finishers until his health failed. Tony was a number one Green Bay Packers fan. He liked peace, order and was always on time. He was a very loving and kind man. His motto was “Your business is your business, and my business is my business.” He was a wonderful husband, father, peepaw, brother, uncle and friend. His journey of life ended on March 14, 2020. He was preceded in death by his sister: Judy Smith, brother Gerry “Red” Smith, Aunt: Gertrude Greer and niece Fallan Smith McKinney. He leaves to cherish his memory his loving and devoted wife Gwendolyn House; three children; Catherine House of Nurnberg, Germany, Laytoria (Montrell) Reeves of Spring Hill, TN, and Terreqous Simmons of Jackson, TN; seven grandchildren; Brooke Perry of Jackson, TN, Dakota Reeves and Kaden Reeves of Spring Hill, TN, Terreq and Terriah Travis of Gallatin, TN, Tylan Simmons of Jackson, TN, and Jakayla Johnson of Smyrna, TN; one sister; Angela “Ann” Smith of Jackson, TN; two brothers; James Long of Jackson, TN and Edward (Nena) Brady of Millington, TN; a mother-in-law; Mary Bommer of Jackson, TN; one aunt; Carolyn Smith of Jackson, TN; five nieces: Megon Smith of Jackson, TN, Ebony (Kevis) Mays, Tiffany “Dirt Dobba” Smith, Charity Smith, and Taraneika Brady of Atlanta, Georgia; two nephews; Orlando “Woo” Smith and Joshua “Ooh” Smith of Jackson, TN and a host of other nieces and nephews, family and friends, as well as a very special friend and caretaker, Mr. Arthur Lee Jones

Mr. Tony Victor House was born on June 12, 1961 in Jackson, TN to the late L. G. Golden and Maggie Bell Smith. He gave his life to Christ in January 2011 and was baptized at New St. Luke Missionary Baptist Church, where he served in the Male... View Obituary & Service Information

The family of Mr. Tony Victor House created this Life Tributes page to make it easy to share your memories.

Send flowers to the House family.