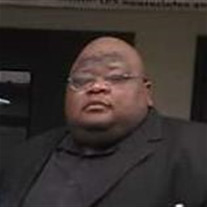 JOURNEY TO EARTH… ALPHA: On March 17, 1975 in Chicago, IL, the late Lacy Calhoun, Sr., and Rochelle Calhoun welcomed into the world their son, Tony Darryl Calhoun, who grew under the nurturing of his parents. AS A STUDENT: Tony grew up and attended school in Macon, GA and later moved to Chicago, IL, where he graduated from Collins High School with honors. Upon graduating, he attended Lane College, where he received his BBA (Bachelors of Business Administration) and Bethel University, where he received his MBA (Masters of Business Administration) AS A MAN OF MEANS: Through great education from his alma mater, Tony was a solid Director of Financial Aid at various college institutions such as, Southwest Community College in Memphis, TN, Paul Quinn College in Dallas, TX and his beloved alma mater, Lane College in Jackson, TN. Tony accepted Christ at an early age and lived life to the fullest and always had a smile or a joke to share with his family and friends. FAMILY LEGACY… AS A HUSBAND AND FATHER: On March 31, 2001, he was united in holy matrimony to Angela Calhoun for which they shared memories for fifteen years. To this union four daughters were born, Kelsey, Amber, Shelby and Zoe. AS A SON: He leaves to cherish his memory, his beloved and dear mother, Rochelle Calhoun. AS A BROTHER: He bids a loving farewell to a sister, Lamonica Calhoun; two brothers, Lacy & Demetrius Calhoun. AS A EXTENDED FAMILY MEMBER: Tony leaves six nephews, Deavin, El Lacy III, Demetrius, Donovan and Tony II; one niece, Shanice; one aunt, Patricia Calhoun-Barnes; two uncles, William Calhoun and Lewis Barnes. JOURNEY TO ETERNITY… OMEGA God directed his angels to come to Earth to escort Tony D. Calhoun to Everlasting Rest after his time of suffering. In the stillness of the day of January 8, 2017, he transitioned into Eternity to join his father, grandparents (Odessa and Abner Redwell; Burnetteceil Calhoun and Charles Pettigrew) and all his family who have preceded him in death. AMEN and AMEN.

JOURNEY TO EARTH&#8230; ALPHA: On March 17, 1975 in Chicago, IL, the late Lacy Calhoun, Sr., and Rochelle Calhoun welcomed into the world their son, Tony Darryl Calhoun, who grew under the nurturing of his parents. AS A STUDENT: Tony grew... View Obituary & Service Information

The family of Mr. Tony Darryl Calhoun created this Life Tributes page to make it easy to share your memories.

Send flowers to the Calhoun family.