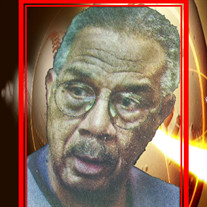 Bro. Tommy Taylor, Jr., was born January 28, 1937 to Ms. Rosie Lee Hicks and Tommy Taylor, Sr., in Jackson, TN. He attended Jackson Public Schools, both at North Jackson Elementary and Merry High School, where he played baseball and sang in the school choir. He was baptized at an early age at Home Baptist Church and maintained his membership there for many years. Later, he joined New Hope and remained until his death. He attended church events as his body would allow and thoroughly enjoyed singing. Two of his favorite songs were “Shine on Me” and “How I Got Over”. He and Rev. Meabon formed a unique bond of which he was most proud. He was a professional baseball player and signed with the Cincinnati Reds and Kansas City Monarchs. He also played baseball in Saskatchewan, Canada. In 1961, he was united in holy matrimony with Bazine McDonald, where they were blessed with two lovely children. During these early years, the family resided in Cocoa, Florida until his return to Jackson, TN in 1973. He remained a loving, caring father and grandfather and never forgot a birthday or special occasion. Following years of Tommy’s return allowed his working at Lane College as a residential monitor of Cleaves Hall. He also was the coach to Lane’s baseball team from 1981 to 1986. Up to his retirement, he taught at Lincoln Elementary School in Jackson, TN. When Tommy played with Kansas City Monarchs, he and Satchel Paige were teammates and Paige named him “Flame Thrower”. After years of expiration, Tommy was inducted in the Negro League Hall of Fame. Tommy was extremely elated upon his completion of the Bachelor of Science in Health and Physical Education with high distinction of Magna Cum Laude in May of 1979. Retiring in 2011 from Jackson Public Schools afforded him quiet time and visiting family. His health began to decline in 2013 and on August 14, 2018, he gave up the ghost. Surviving to continue his legacy is, Toni Cheree Taylor, daughter and Terry Derrell Taylor, son, both of Crestview FL; Bazine Taylor McDonald, mother of Toni and Terry of Crestview, FL; Tatum Hope-Rubyn Taylor, grandson of Crestview, FL; eldest cousin, Minnie Isabell Johnson of Alamo, TN; special cousin, Bobbi “D” Jones of Jackson, TN; close family friend, Jimmy Charles Baker of Turks and Caicos; Terry King and Gine Brewer-Nelson, two special colleagues of Jackson, TN; special friend, Anita Hodges of Jackson, TN and a number of other relatives and friends.

The family of Mr. Tommy Taylor Jr. created this Life Tributes page to make it easy to share your memories.

Send flowers to the Taylor family.