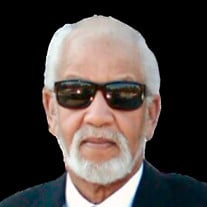 Theodore Roosevelt Golden, Jr., was born April 9, 1938 to the union of Mattie Sue Allen Golden and Theodore R. Golden, Sr. in Denmark, Tennessee. He is a graduate of West High School in Denmark, Tennessee. He became skilled at all levels of plumbing and construction as a master brick layer and construction foreman in his more than 30 years of work in the construction industry. He accepted faith in Christ as a teenager and joined Cerro Gordo Baptist Church, where he became an active member serving as a member of the Board of Trustees, singing in the Male Chorus and Senior Choir and as a member of the Deacon Board. He later joined the Mount Olive Baptist Church, where he served as a faithful member for many years. Theodore was united in marriage to the late Barbara Jean Merriweather Golden Johnson and seven children were born from this union. He was a dedicated provider for his family as he worked for several years in Nashville, Tennessee during the construction boom in the 1960’s. He subsequently returned to Jackson, Tennessee, where he worked at the Milan Army Ammunitions Plant in Milan, Tennessee. Theodore later returned to the construction business as he became a construction supervisor with Wick’s Building and Construction. His job opportunities were limited after suffering a heart attack in 1985, yet he continued to work and provide for his family. Junior, as he was affectionately called, was committed to his family and valued his relationships with friends and almost never said no to those in need of his assistance. When his health began to fail, his children provided him with care and support until a few months ago, when he became a resident at Forest Cove Manor, where he went to meet the Lord. Theodore R. Golden, Jr. departed this life on Monday, February 20, 2017. He was preceded in death by his parents, Theodore Golden, Sr. and Mattie Sue Allen-Golden; brother, Cleveland Golden, and sister, Jimmie Ruth Golden-Beckum. He leaves to cherish his memory: Seven children, Eleanor Patterson of Nashville, TN, Theodore III (Cynthia) of Lithonia, GA, Dexter (Brenda) of Jackson, TN, Michael (Sandra) of Dickson, TN, Shelia Forrest of Nashville, TN, Martin (Letha) of Memphis, TN, and Tywanda Golden Lawal (Ola) of Lawrenceville, GA; one god-son, Mark Cooper of Jackson, TN; 17 grandchildren and 16 great-grandchildren; six sisters, Juanita Smith, Geraldine Williamson and Vanessa Ike of Denmark, TN, Debra (Willie) Lacy and Karen (David) Fuller of Jackson, TN and Martha (Yancy) McCall of Nashville, TN; two brothers Willie (Maxine) Golden of Milwaukee, WI and Jerry (Faye) Patton of Jackson TN; one brother in law, James Beckum of Milwaukee, WI; one aunt Essie Golden of Jackson, TN and a host of nieces, nephews, and other relatives and friends.

The family of Mr. Theodore R. Golden created this Life Tributes page to make it easy to share your memories.

Send flowers to the Golden family.