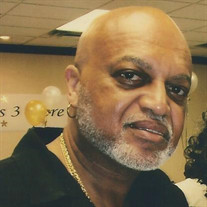 Steve Louis McCorry, 67, of Chicago Illinois, passed away on November 1, 2015 after a lengthy battle with cancer. He was born on July 29, 1948 in Jackson Tennessee to Al McCorry and May Evelyn McCorry. Steve grew up in Jackson Tennessee. At a young age he accepted Christ as his savior and was baptized and became a member of Salem Baptist Church in Jackson Tennessee. He graduated from Merry High School in Jackson TN in 1966. After high school he attended Lane College in Jackson TN before moving to Chicago Illinois. While living in Chicago Steve spent his professional career working for the City of Chicago and also did local volunteer work with both disadvantaged children and adults re-entering society and the workforce. Steve worked as a computer programmer, enjoyed reading and spending time with his family. He was a devoted family man and loved his sons and daughter dearly. Steve met the love of his life, Janice Ross, in 1986 in Chicago, Illinois. To this happy relationship three sons were born. Steve is survived by Janice Ross of Chicago, Illinois; three sons, Jonathan Ross, Che D. McCorry and Steven L. McCorry, all of Chicago, Illinois; step daughter, Sonja Colbert; and Rashad Dawson, Leah Morris and Layla Morris step grandchildren also of Chicago, Illinois. Steve is also survived by his mother, May Evelyn McCorry of Jackson Tennessee and his brother, Don A. McCorry, also of Jackson Tennessee; aunts Everlener McCorry and Esther L. Williams, both of Jackson TN; Arleta Williams of St. Louis, MO and his niece and nephew and other relatives and friends. Steve was preceded in death by his father, Al McCorry in 1996 and his brother, Phillip E. McCorry in 1991 and a half-sister, Bobbie Jean McCorry all of Jackson Tennessee. A memorial service will be held at Doty Nash Funeral Home, 8620 S. Stony Island Avenue in Chicago IL at 2:00 pm Saturday, November 7, 2015. Burial will follow in Parkway Memorial Gardens, Jackson Tennessee, on Saturday November 14, 2015.

Steve Louis McCorry, 67, of Chicago Illinois, passed away on November 1, 2015 after a lengthy battle with cancer. He was born on July 29, 1948 in Jackson Tennessee to Al McCorry and May Evelyn McCorry. Steve grew up in Jackson Tennessee.... View Obituary & Service Information

The family of Mr. Steve Louis McCorry created this Life Tributes page to make it easy to share your memories.

Steve Louis McCorry, 67, of Chicago Illinois, passed away on...

Send flowers to the McCorry family.