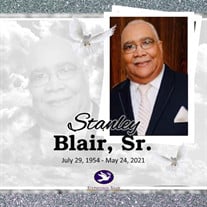 Stanley Davis Blair, Sr., was born on July 29, 1954, to Oliver Willie Blair and Eva Barksdale Blair. The eighth of eight children, he was baptized into Christ as a young adult at Front Street Church of Christ. Stanley graduated from Gibson High School in Gibson County, TN. He moved to Michigan for a short period of time, but later returned to help with the care and oversight of his parents. Stanley was employed with several local companies, but retired from CeCo Doors, Milan TN, as a production worker. In 1981, he was united in holy matrimony to Dorothy Poplar Blair until her death in November of 2010. To that union, three children were born. In 2016, he married Betty Hughes Blair, who was loving and devoted to him, his children, and grandchildren until his death. Stanley was an avid photographer and enjoyed taking pictures of those he came in contact with. If he was at an event, he was sure to have his camera with him ready to take snap shots. In addition to photography, he loved studying his family’s genealogy and creating the family’s tree. Along with his late wife, Dorothy, he was preceded in death by his parents, Oliver and Eva Barksdale Blair, and siblings, Leotra Blair, Nettie Ruth Blair DuPree, and Isaac Julius Blair. Stanley is survived by: his wife, Betty Hughes Blair; children, Monica Doretha Blair (Drew) Stevenson, Veronica Colletha Blair, Stanley Davis Blair, Jr., and Shaun Brown; brothers, Willie (Ann) Blair and Grady (Carolyn) Blair; sisters, Mattie Blair and Doretha Blair; four grandchildren, Aubrey Stevenson, Kellen Stevenson, Shibreal Rogers, and Marquarius Brown; and many other loving family members including nieces, nephews, cousins, and special friends. His humble spirit and hearty laugh will always be remembered.

Stanley Davis Blair, Sr., was born on July 29, 1954, to Oliver Willie Blair and Eva Barksdale Blair. The eighth of eight children, he was baptized into Christ as a young adult at Front Street Church of Christ. Stanley graduated from Gibson... View Obituary & Service Information

The family of Mr. Stanley Davis Blair Sr. created this Life Tributes page to make it easy to share your memories.

Send flowers to the Blair family.