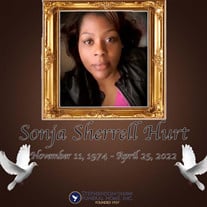 Sonja Sherrell Hurt, was born on November 11, 1974, to Andrea Hurt and Donny Williams in Jackson, Tennessee. She later moved to Milwaukee, Wisconsin in 1986. She departed this life on April 25, 2022. She received her formal education in the Milwaukee School System and she graduated from John Marshall High School. She continued her secondary education at Milwaukee Technical College, by receiving an Associate Degree in Human Services. She was employed for many years at the Milwaukee County Health and Human Service Office. While she helped many families obtained government assistance and other needed resource. She also worked as a Supervised Visitation Worker where she monitored interactions between children and their parents in an effort for the parents to be reunited with their children. In her latter employed Sonja worked for the Milwaukee Public School System as a pra-professional, assisting teacher in educating children. She was very smart and wise, she was a protector and would not give up on anything without a fight. She was also loving, caring, and thought about others often. She enjoyed spending time with family and friends, reading and helping others. She was preceded in death by her father: Danny Williams; maternal grandparents: Mamie and Moses Hurt; paternal grandparents: Helen Williams and Freddie Cross, Sr.; step-father: Jerry Wayne Kinnes; material aunt: Diane Hurt. She leaves to cherish her memory her beloved children: Devion Yarn and Jaila Yarn: her mother: Andrea Hurt; sisters: Tamatha (Victor) McCants and Larrcia Williams; brothers: Unterrith (Angela) Hurt, Marquis Williams and Jerry (Jasmine) Hurt; step-grandmother: Ella Kinnes; parternal uncle: Freddie Cross, Jr.; aunts: Carolyn (Larry) Hopkins, Dorothy Hurt, Juanita Rivers and Anita Hurt; uncle: Bruce Hurt; step-aunts: Shirley Bullock, Alice Kinnes, and Gwendolyn (David) Mays; step-uncles Willis Cole, Rickey Kinnes Jr.. Patrick (Tameka) Kinnes, and Jonas Kinnes, Jr., as well a host of nieces, nephews, cousins and friends.

Sonja Sherrell Hurt, was born on November 11, 1974, to Andrea Hurt and Donny Williams in Jackson, Tennessee. She later moved to Milwaukee, Wisconsin in 1986. She departed this life on April 25, 2022. She received her formal education in the... View Obituary & Service Information

The family of Ms. Sonja Sherrell Hurt created this Life Tributes page to make it easy to share your memories.

Send flowers to the Hurt family.