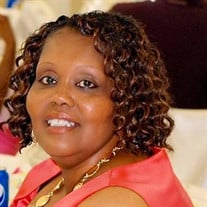 On Saturday, October 24, 2015, one of God’s precious children, Mrs. Sonia Cherita Oseni-Bernard, was unexpectedly called to be with her Lord and Savior. Although her earthly life ended suddenly and without notice, God knew that her purpose here on this earth was complete. Mrs. Bernard was born May 16, 1962 to the late George and Kathleen Swift. She was married to Mr. Barrington Bernard for nearly 25 years. Mrs. Bernard was the loving and selfless mother to three sons, Ayo, Bryan and Courtney. Sonia was raised in church from a young age, but there was a time in her life she wandered from the ways of God. Once Sonia found her way back to the Lord and professed her dedication to Him once again, she remained faithful. Sonia was a selfless, loving person who devoted herself to the well being and happiness of others. Sonia was an active church member for many years at Key’s Chapel United Methodist Church in Lexington, TN. Most recently in her life she belonged to New Life in Christ Church in Lexington, TN. Sonia was a dedicated kindergarten teacher at Paul G. Caywood Elementary School. Sonia’s teaching career began in Florida at Sandpiper Elementary and Welleby Elementary schools. Sonia loved each of her students and treated them as her own year after year. Sonia was a member of the Friendship Club and enjoyed cooking, shopping and spending time with family and friends. Sonia was a dedicated wife, mother, grandmother, sibling and friend. Mrs. Bernard leaves to treasure the memories of her life a devoted husband, Barry Bernard, three loving sons, Ayo (Chelcie) Oseni, Bryan (Shelby) Bernard and Courtney (Maliyah) Bernard and two step-children, Cherri and Vinroy Bernard. Sonia also leaves behind two caring brothers, Gregory (Ella) Swift and Brandon Swift. Sonia had one grandson, her pride and joy, Avery and one granddaughter, Brylynn. One of Sonia’s very special friends, “Aunt Erma” is also left behind. Additionally, Sonia leaves behind a multitude of nieces, nephews, cousins and friends who she cared very deeply for. Mrs. Bernard was preceded in death by her step-son, Marvin Bernard.

On Saturday, October 24, 2015, one of God&#8217;s precious children, Mrs. Sonia Cherita Oseni-Bernard, was unexpectedly called to be with her Lord and Savior. Although her earthly life ended suddenly and without notice, God knew that her purpose... View Obituary & Service Information

The family of Mrs. Sonia Bernard created this Life Tributes page to make it easy to share your memories.

Send flowers to the Bernard family.