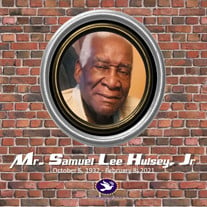 Samuel Lee Hulsey, Jr. a life-long resident of Jackson, TN died peacefully on February 08, 2021, at the age of 88 at the Jackson Madison County General Hospital. He was born October 05, 1932, to the late Sam (Snag) and Virgie Lee Hulsey. He gave his life to Christ at an early age at Mt. Tabor Presbyterian Church, where he served as a faithful member and an Elder under the leadership of Rev. Dr. Stanley Woods. His life of 88 years was marked by his hard work and a big heart for his ex-wife, Mary Etta Newbern Hulsey. To this union two children were born, Ralph and Samuel Maurice Hulsey. He fathered eight other children. He leaves behind, for us, a legacy of a hard-working man, love, and wisdom. He was loved and admired by all that knew him and served as a role model for everyone who came in contact with him. He was honorably discharged after serving as a paratrooper in the U.S. Army for six years. He was an entrepreneur, he owned Hulsey’s Bricking Company and he was noted as the first African American male to own his own asphalt plant in this area. He is preceded in death by his parents, Sam and Virgie Hulsey, his brother Jimmy Hulsey and his sisters Mary L. Northern, Luvinnie Mackey, Bernice Reid, and Mae Francis Wilson. He leaves cherished memories to his surviving children Samuel Maurice (Carolyn) Hulsey, Ralph Hulsey, Angela Floyd, Pamela (Reginald) Merriweather, Mark (Karen) Reid, Michael Reid, Jeffery (Enova) Reid, Tige Reid, Malcolm (Elizabeth) Merriweather, and Thaddeus Merriweather. Two brothers, William Hulsey and Joe Hulsey, and one sister Sara (Milton) Boles. Donald Hill a special godson/caretaker. He will be remembered by a host of grandchildren, great-grandchildren, nieces, nephews, cousins, and many construction contactor friends.

Samuel Lee Hulsey, Jr. a life-long resident of Jackson, TN died peacefully on February 08, 2021, at the age of 88 at the Jackson Madison County General Hospital. He was born October 05, 1932, to the late Sam (Snag) and Virgie Lee Hulsey.... View Obituary & Service Information

The family of Mr. Samuel Lee Hulsey Jr. created this Life Tributes page to make it easy to share your memories.

Send flowers to the Hulsey family.