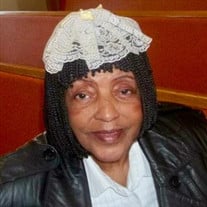 Ruthie Mae Smith was born Ruthie Mae Gilreath on February 28, 1937 in Center Ridge, Arkansas, to the late Fred Gilreath and Rena Oates Gilreath. Ruth grew up in a Christian home where she attended public schools until the age of 14. At that... View Obituary & Service Information

The family of Ms. Ruthie Mae Smith created this Life Tributes page to make it easy to share your memories.