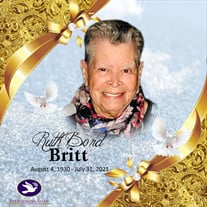 Ruth Bond Britt was born in Brownsville, Tennessee on August 4,1930, the seventh of eleven children born to Corneilus and Lilla (Shaw) Bond. She attended Haywood County Schools and graduated from Carver High School. She went on to receive her Batchelor of Arts degree at Lane College in Jackson, Tennessee where she became a member of Delta Sigma Theta Sorority. She met Joseph I. Britt while attending Lane and they married on February 17, 1952. They moved to Chicago, Illinois where she started her career as an educator in the Chicago Public School System. Upon returning to Jackson, Tennessee in 1965, she taught briefly in Haywood County. She was a fourth grade teacher at Denmark Elementary school until 1970. She taught second grade at Malesus Elementary until she retired in 1986. Gracefully she balanced being an educator and mother while being an essential partner in several entertainment venues her husband established. Momma B, as she was affectionately called, was just that, a mother to all. Her students, children, nieces, nephews, grandchildren, friends, and anyone else who encountered her knew how endearing she was. After being retired for over Thirty years, students she taught, would still call, come by and send her cards. She never forgot their names or faces. Momma B accepted Christ at an early age. She was a member of Beech Grove Church of Christ, and later became member of East Jackson Church of Christ. She was preceded in death by her husband: Joseph I. Britt Sr.; two children: Pamela Annette Britt and Joseph I. Britt Jr. ; siblings: Everett Bond, Helen Batchelor, Alfred Bond, Edger Bond, Herman Bond, Lilla “Jean” Matlock, Harry Bond, Howard Bond; sister-in-law: Mattye Sue Bond. Left to remember and celebrate her life are her children: Linda (Thomas) Sallee, Jr., Derrick (Collene) Britt; grandchildren: Thomas Sallee III, Joseph Irvin (Kimberly) Britt III; Marques Sallee ; Quri Twitty; Sheldon Michael (Joycelyn) Brown; Shelbie Megan Brown; great-grandson: Joseph I. Britt IV; special daughter: Cheryl (Michael) Brady; special friends and caregivers Mrs. Retha Taylor, Annette Commage, and Beverly Mason. sisters-in-law: Suzanne Bond; Della Bond and a host of loving nieces, nephews, cousins, other relatives and friends. We would like to give a special thank you to Alicia, Michelle, and Stephanie of Hospice of West Tennessee.

Ruth Bond Britt was born in Brownsville, Tennessee on August 4,1930, the seventh of eleven children born to Corneilus and Lilla (Shaw) Bond. She attended Haywood County Schools and graduated from Carver High School. She went on to receive... View Obituary & Service Information

The family of Mrs. Ruth Bond Britt created this Life Tributes page to make it easy to share your memories.

Ruth Bond Britt was born in Brownsville, Tennessee on August...

Send flowers to the Britt family.