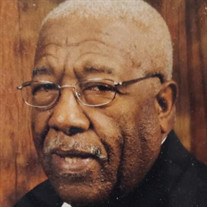 Bro. Roy “June” Fuller, Jr. was born in Madison County, Tennessee on August 20, 1942 to the late Bro. Roy Jackson Fuller, Sr. And Sis. Jeanette Johnson Fuller. Bro. Fuller passed away on Friday, May 1, 2020 after a brief illness. He attended Tri-Community School and West High School where he later dropped out and went to work. He was employed with The Jackson Sun and Cablevision Industries for a number of years. He was also handyman/landscaper for Mrs. Beth Diffee and his family often referred to him as “Driving Mrs. Diffee.” In addition, he worked for Mrs. Diffee’s son, Senator Joe “Nip” McKnight. He also worked for the Proctor family that includes the grandson, Scott Ouer until his death. Bro. Fuller was a member of The Tabernacle of David, The House of Israel since he was four years old. He served as a dedicated deacon and trustee until his health failed him. Roy was well known for his many comedic antics and colorful language like: belp, for belt; screet for street; that slipped my remembrance for I forgot; skripe for sprite; master heart attack for massive heart attack; Cadillac for cataracts and ‘you gotta lurn (learn) like I lurned (learned) to name a few. Every day he went to the gas station on Airways for his daily scratch off lottery ticket fix. Uncle June also had a unique way of expressing his affection to his nieces, nephews and church family children. He would tickle their bellies, ask if they were goosy goosy, pop their fingers and toes to see how many “stories” (lies) they told and call them some eccentric names like: Big Sister, Mally Mal, Meat, Nemo, Dadale, Mur, Jack Fuller, Pong-Tong, Taro, Jolesa, NayBoo, Da-rail, Tireek Shaw, Sentry, Flanz and last but not least Daanita AND the Shaws. Bro. Fuller was preceded in death by a brother, Billy Clyde Fuller, his parents and a daughter, Annette Clark. In 1969, he married Esther Lee Cox and to this union, two daughters were born. He leaves to cherish his memory: a devoted wife of 51 years, Esther Lee Fuller; two daughters, Karen Denise and Keisha DeJuan Fuller both of Jackson, TN; two grandchildren, Chelsea Smith and Devin Clark, five great-grandchildren; a brother, Edward Vernon Fuller of Jackson, TN; five sisters, Nellie Jane Richmond, Tarstein Kaye Thacker, Geraldine Fuller Copeland, Mary Elizabeth Hill (Jerry) and Juanita Yvonne Fuller all of Jackson, TN; two sisters-in-law, Lula Pearl Harvey of Jackson, TN and Geneva Lawrence of Memphis, TN; three brothers-in-law, Herman Cox (Ruby Mae) of Sommerville, TN, Brittian Cox and Oliver Cox, both of Memphis, TN; one uncle and aunt, Robert Thomas Johnson (Gladys), Alberta Johnson all of Grand Rapids, MI; another aunt, Carrie Fuller of Peru, IN; a host of nieces and nephews; and very special friend that stood by his side until the end, Bro. Lee Freeman, Sr. and his wife, Sis. Sarah Freeman.

The family of Mr. Roy Fuller Jr. created this Life Tributes page to make it easy to share your memories.

Send flowers to the Fuller family.