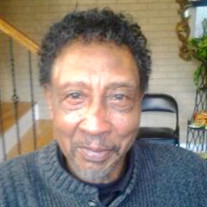 Roy Douglass Akins was born April 28, 1942 in Jackson, TN to the late Willie Akins, Sr. and the late Rhea Helen Holliday. Roy worked for the City of Jackson in his younger adult years, started his own construction business under his own name, Roy Akins Construction, and then, later worked for Union University in the maintenance department. That is where Roy was always noted for his friendliness and kind heart by his fellow co-workers and teaching staff. Roy also did carpentry work in his later years and worked a many of times for a little of nothing for his elderly customers. This however, got him into trouble with his dear late wife, Mary Lou Akins, but she knew that’s what kind of man he was, and he would give another person the shirt off his back. Roy was a simple kind of man, he knew carpentry and could fix just about anything, he loved his Coca-Cola, his old truck, and most of all wanted to make sure all his children were happy and safe. Roy entered eternal rest on the night of Wednesday, January 2, 2019 and will be wholeheartedly missed. Roy was preceded in death by his dear wife, Mary Lou Akins (mother of Mark, Steven, Brooke, Michael and Xavier); his first wife Lucy Mae Akins (mother of Angela, Pamela, Roy Jr. and Michael); his parents, Rhea Helen Holliday and Willie Akins Sr. and brothers, Willie Akins Jr. and Robert Holliday and sister, Dorothy Akins Jones. He is survived by all of his children: Angela (late Euhommie) Bond of Atlanta GA, Pamela Akins of Atlanta GA, Brooke Transou-Bailey, Roy (Lesa) Akins, Jr., Michael Akins, Mark Akins, Steven Akins, Michael Gautier and Xavier Gautier all of Jackson, TN; His beloved sisters, Iva Morgan of Chino, CA, Patricia Akins of Plainsfield NJ, and Ollie (Chris) Akins Harvey of Plainsfield, NJ and brothers: Grady (Sylvia) Akins of Jackson, TN, Steven Holliday of Fontana, CA, Dwight Holliday, Adolphus Holliday, Lorenzo Holliday all of Ontario, CA. He also left a host of grandchildren and great-grandchildren to cherish his memory.

Roy Douglass Akins was born April 28, 1942 in Jackson, TN to the late Willie Akins, Sr. and the late Rhea Helen Holliday. Roy worked for the City of Jackson in his younger adult years, started his own construction business under his own name,... View Obituary & Service Information

The family of Mr. Roy Atkins created this Life Tributes page to make it easy to share your memories.

Send flowers to the Atkins family.