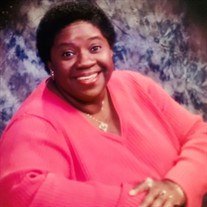 Not sure what to send?

Rosie Faye Robinson Phelps was a mother of two daughters, and six grandchildren. She stated her children and grandchildren were her most "important attribute". Her 71 years was filled with many accomplishments! she was educated within the local school system, graduated from Jackson State Community College, and attended The University of Memphis with a major in Sociology. She received her degree in the early 1990’s She ran a successful African cuisine restaurant "The Wooden Spoon" with her husband, Will Robinson and spread African history with her traveling exhibit. She also hosted her own radio show, "Jackson Nostalgia" in 1994 on WTJS, Jackson’s first and oldest radio station. In 1998, she was a freelance artist with Jackson Parks & Recreation. Her genres were storytelling, and one woman plays. African American historical aspects were her specialty. Rosie was a founding member of S.A.A.C.A, the concerned citizens of the East Jackson Coalition and was a member of J.O.N.A.H. and the N.A.A.C.P.. In 1999, she received an award from the Tennessee Arts Commission for her work in preserving Tennessee history. She ran for City Council two times and in Madison County as well as her tireless work portraying the life of famed singer, Big Maybelle Smith and who through her work, was recognized with a Tennessee State Historical Marker in 2019. She was also a clown named Erbie. She was inspired by the works of Bert Williams (An African-American Vaudeville star from the early 1900’s) was her persona. She used her moto "Laughter Is the Best Medicine" as she performed for children all over West Tennessee as Erbie gaining smiles, laughs and friends along the way. She is survived by her daughters: Angela and Charlene. her grandchildren, Layla, Roseanna, Adrianna, Leland, Prince and Lauryn; brothers: Prentice Hunt and Barry Hunt; her best friend/sister, Jessie Chatman. and many loving nieces, nephews, cousins, and colleagues. she was a local treasure who will be missed by many. "Jesus said to her, 'I am the resurrection and the life. those who believe in me, even though they die, will live, and everyone who lives and believe s in me will never die.' John 11: 25-26

Rosie Faye Robinson Phelps was a mother of two daughters, and six grandchildren. She stated her children and grandchildren were her most "important attribute". Her 71 years was filled with many accomplishments! she was educated within the... View Obituary & Service Information

The family of Ms. Rosie Faye Robinson Phelps created this Life Tributes page to make it easy to share your memories.

Rosie Faye Robinson Phelps was a mother of two daughters, and...