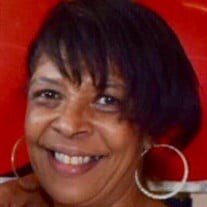 Mrs. Rose Lee (Ingram) Love, daughter of the late Ben (Phil) and Emma Jane Ingram was born October 17, 1957 in Jackson, TN. She attended the public schools of Madison County and was a graduate of West High School, Class of 1976. At an early age she professed her faith in Jesus Christ and joined the Walnut Grove Missionary Baptist Church. In the early 90’s Rose relocated with family to Chicago, ILL where she was departed from this earth to the Kingdom of Heaven on October 29, 2018. As we reflect on memories of Rose the first thing many of her family and friends will say is that she was the “LIFE of the PARTY”! Her life was ignited with the love from her family and friends. She would always say “you have a choice, you have a family, love your family now that’s the REAL-REAL”! Although we will all miss her she is now united with the one who truly had her heart, her son Kennell Love. We know that they are cutting up right now she is probably popping him all over his head, smiling, and crying at the same time. She leaves to cherish her wonderful memories with her Husband Kenneth Wayne Love; God-daughter/Niece Ebony Williamson; six Sisters, Annie Ingram of Flint, Michigan, Bonzie Ingram, Mary I. S. Fuller, Barbara Ingram, Debra “Pee-Wee” (Robert) Easley all of Jackson, TN, Gussie Senter of Nashville, TN; three Brothers, Robert (Ann) Ingram, Jerry Ingram of Jackson, TN and Nathaniel (Melissa) Ingram of Erie, PA; Father-in-Law Fred Britten, Mother-in-Law Jeanette (Sylvester) Schley; two Brother-in laws; Toby (Ava) Britten and Chris (Tamika) Britten all of Chicago, Illinois and host of nieces, nephews, cousins, other relatives and friends. Rose was preceded in death by her Son Kennell Love; Parents Ben (Phil) and Emma Jane Ingram; Sister Mattie Bond; Brother Ben Ingram Jr; Sister-in-law Faye Ingram; and Mother-in-law Margie Britten.

Mrs. Rose Lee (Ingram) Love, daughter of the late Ben (Phil) and Emma Jane Ingram was born October 17, 1957 in Jackson, TN. She attended the public schools of Madison County and was a graduate of West High School, Class of 1976. At an early... View Obituary & Service Information

The family of Mrs. Rose Ingram Love created this Life Tributes page to make it easy to share your memories.

Send flowers to the Love family.