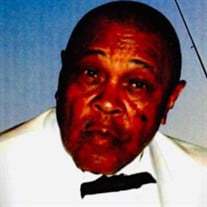 Robert Earl March was born November 22, 1943 in Medon, Tennessee to Luvenia (Marshall) March and Evage March he was known as, “The famous sharecropper" in Medon, Tennessee. Both his parents have preceded him in death. He gave his life to Christ at an early age at the Church of God where his father pastored in Tennessee. He was educated in the Madison County School District in Medon, Tennessee. During his younger years he was known as the "Golden Boy “where sharecropping on the family farm was the way of life. Robert was exceptionally good and competitive when it came to hunting, fishing and attending to crops for the family business. He moved to Detroit, Michigan in the late 1960's where he resided with his favorite cousin, Herman Marshall who has preceded him death. He later started working for Ford Motor Company when he was introduced to Angela M. March by one if his fellow coworkers. Robert Earl and Angela M. Tarrant were married in March of 1971, and with their union they were blessed with two beautiful daughters Geralyn Purifoy and Rebecca Norman. As time passed Robert started working in construction building homes for 35 years. In 1981 Robert Earl met his lifelong partner, Bessie Mae Anderson. For 40 plus years they have many fond memories. Some of their favorites was spending time with their grandchildren and riding to Tennessee to visit with family. Robert took care of Bessie Mae, with pride and joy. He loved giving his helping hand to assist when needed whether it is to move you from one house to the next, painting, cutting grass, barbecuing, transporting; there was no limitations. Robert Earl was an up standing citizen who made time for everyone. Preceded him in death were four sisters: Louise Starr, Lula Pearl March, Leola "Scooter" March, and Anne Nell March and two brothers; Odessa March and Lonnie March. He leaves to cherish his memory; a devoted companion Bessie Mae Anderson, two daughters; Gerayn Purifoy (Frederick), and Robecca Norman (Kenneth), three grandchildren. Kwame Collins, Mawasi Tarrant, and Aliya Rush, one great grandchild; Amaria Collins, one sister; Christine Marshall (Mack), four brothers; J.C. March (Mary), Odell March (Linda), Jessie “Papee" March, and Bobby Lee March (Glenda) and his Mandalay family: Ms. Janis and Keo. Ms. Collier, Ms. Angela (Mr. Charlie) and Ms. V. and a host of nieces and nephews, cousins and friends

Robert Earl March was born November 22, 1943 in Medon, Tennessee to Luvenia (Marshall) March and Evage March he was known as, &#8220;The famous sharecropper" in Medon, Tennessee. Both his parents have preceded him in death. He gave his life... View Obituary & Service Information

The family of Mr. Robert Earl March created this Life Tributes page to make it easy to share your memories.

Send flowers to the March family.