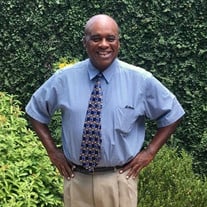 Rickey Steele was born January 4, 1962, in Chicago, Illinois to the union of Wardell, Sr. and Theresa Chisley Steele. He transitioned from this world to eternity on Monday, April 17, 2017, at St. David&#8217;s Austin Medical Center in Austin,... View Obituary & Service Information

The family of Mr. Ricky Steele created this Life Tributes page to make it easy to share your memories.

Send flowers to the Steele family.