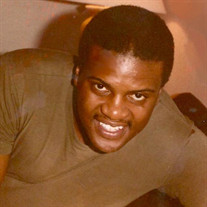 Ricky Murphy was born January 5, 1959 to his Mother Dorothy Ware. He passed away on Monday, November 17, 2015. He attended Jackson City Schools and became interested in football in Junior High. He was a standout player at Jackson Central Merry High School. Upon graduation from JCM in 1978 Ricky attended University of Tennessee @ Martin and Lane College where he played football. He left Lane College and joined the United States Air Force on March 27, 1981. On October 28, 1982 Ricky married his high school sweetheart, Gayle Denise Goodman. From this union they had three beautiful children: Ricky Lamont, Ronald Pierre and Lauren Dior Murphy. The life that Ricky and Gayle built together was filled with Joy. High school sweethearts, traveling the world together, building a family and trusting in the Lord. Few people get to experience this type of Love, real Love the kind you pray for and celebrate. I found this photo album of Big Rick’s it was filled with pictures of Gayle and it said “Destiny…. If I could sit across the porch from God I’d Thank Him for lending me You!” Ricky loved cooking, sports, especially football and spending time with family and friends. He never met a stranger and lit up a room everywhere he went. Ricky loved the Barkays, old school music and laughing. Family time meant everything and he will be missed by his loving wife of 33 years, Gayle D. Murphy, his children, Ricky (Julia), Ronnie, and Lauren Murphy. His beautiful mother, Mrs. Dorothy Ware. One of the greatest loves of Ricky’s life was being a grandfather of Ricky Thomas, Kaden, Kaleb, Jada, and Jade Murphy. He loved his siblings, Linda Ware, James Ware, Jimmy (Thelma)Murphy, Calvin Price, Doris Ware, and Sharon Ware. Ricky was a brother to Gayle’s siblings and a son to her mother Mrs. Frances Goodman. Ronald McGhee, James Thomas (Tonya) Goodman, Cheryl (Michael) Brady. A host of nieces and nephews, cousins and other relatives are celebrating his home going but struggling with their sadness. He was preceded in death by a grandmother Mrs. Mary White, a sister Ms. Gloria Murphy and his father in love Mr. James T. Goodman Jr. In the words of “Big Rick” Don’t pity me I know where I am going. Get yourself ready!

Ricky Murphy was born January 5, 1959 to his Mother Dorothy Ware. He passed away on Monday, November 17, 2015. He attended Jackson City Schools and became interested in football in Junior High. He was a standout player at Jackson Central... View Obituary & Service Information

The family of Mr. Ricky Murphy created this Life Tributes page to make it easy to share your memories.

Send flowers to the Murphy family.