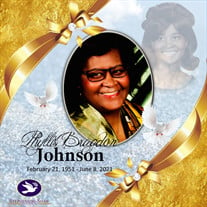 Phyllis Alice Bragdon Johnson was born in Fort Lauderdale, Florida on February 21, 1951. She answered her divine summons at 3:56 p.m. on Tuesday, June 8, 2021 surrounded by her family at Regional One Health Medical Center in Memphis, Tennessee. Phyllis embraced her origins steeped in a deeply rich culture of pioneers, visionaries, and community activists. Her mother, the late Frema Bragdon, the family historian, was the daughter of the late Rev. Henry Pleamon Bragdon, Sr. He built the first structure for Mt. Olive Baptist Church in 1923, led the eight original members through tremendous challenges, and grew the membership to 500 by 1930. Phyllis' father, the late Oscar Wells, served his country during the Korean War, and later became a gifted Artisan. He was the son of the late Rev. O.W. Wells who shepherded Mt. Olive through the Depression, World War II, and continuous growth. After accepting Christ as her personal savior at the age of 9, Phyllis was baptized under the pastorage of her great, great uncle, the late Rev. Robert H. Lee. She sang in the Choir, was active in Bible training classes, and learned hundreds of scriptures. Her exceptional oratorical skills were honed under the tutelage of Mrs. W.F. Morton. She committed to an abiding faith in God. In 1955 was a pivotal year in America. The Big Five: Gail, Don, Greg, Brenda, and Phyllis received a powerful lesson from Aunt Pat who was only 14 years old, just like Emmett Till. With her Mother's permission, she showed them the Jet Magazine and told them what happened to him. In 1959 (Gail had moved to Ohio a few years earlier), Don marched them downtown to the segregated lunch counter, they sat down and placed an order. They were always served and were not afraid or intimidated. Phyllis found ways to overcome injustices, inequalities, and kept chains off her mind. And a little child shall lead them. Phyllis was a child full of joy and wonder. She enjoyed her naps. Her smiles and bright eyes would light up the household. She fostered many friendships. As an adult she still took her power naps and delighted in many lasting friendships. Education was paramount in the Bragdon household. Phyllis attended Ruby Watson Nursery,Walker Elementary, North Fork Elementary, Everglades Jr. High, Dillard High and graduated from Stranahan High School in 1969. The arrival of "Miss Alice in Wonderland" caused a little stir in Paducah, Kentucky and opened pivotal doors. She thrived in the well-structured professional setting at West Kentucky Vocational College. For relaxation, she played Table Tennis which had always been one of her joys and no one could beat her. Her skills and movements were a wonder to behold. Ask Danny Johnson how he met Phyllis. It was a wrap. Can you hear wedding bells? When Danny and Phyllis finally joined in Holy Matrimony, they formed an abiding union. They were grateful for their one and only son, Shaun P. Johnson, a deeply beloved treasure. Henderson, Tennessee became "home" for Phyllis for almost fifty years. Danny's parents, family, and enchanted community welcomed her. The compassion, understanding, and pace reminded her of the close-knit village that Ft. Lauderdale of her early childhood had been. When she visited "the Venice of America", she dipped in the Atlantic Ocean, feasted on mangoes, sea grapes, jelly coconuts, and enjoyed her family and friends, but she found her purpose, her bliss, and the love of her life in Henderson. To God be the glory! Phyllis joined Beech Springs Baptist Church in Jacks Creek, where she was a beloved active member, and, for many years, Phyllis worked at Grinnell as an accounts payable clerk. She received many accolades and awards. When Shaun and Pamela married, the two women formed an unbreakable bond like Naomi and Ruth. Your God will be my God. She cherished her two grandchildren, Ebony and Aaron, and emulated her gifted, wise grandmother. She continued to pass on principles based on an abiding love for God, yourself and others. Her legacy to her great grandchildren was to teach them that they are chosen branches that need to stay connected to the true "vine". Danny and Phyllis partnered with a few national organizations. For fifteen years, they supported and worked with DOMES to build vibrant communities, to remove barriers to well-being, and to promote mental health. Even through years of chronic illnesses and Danny's tireless dedication in taking care of his wife, Phyllis and her niece Karma, daughter of her deceased brother, Gary Bragdon, gathered items to launch DHBLISS division of DOMES (Doreatha Hankerson Bragdon Legacy Implementing Synergistic Solutions). Seek ye first the Kingdom of God and his righteousness, and all these things shall be added unto you. Matthew 6:33. When Danny and Phyllis joined Kingdom Builders Christian Center Church (Pastor V. R. Brice), they committed to their Redeemer's Kingdom mandate. Phyllis loved her church family, and always reminded them that, "All is well". Our precious Phyllis, as a child of the most High, full of love, light, forgiveness & so much more, we celebrate your impact, influence and seven decades of God's eternal breath. What a phenomenally sublime woman of substance! You fought a good fight; you finished your course. To God be the Glory. Surely, he has borne our griefs, and carried our sorrows... (Isaiah 53:4) Phyllis leaves to cherish her life and memories: anointed husband, Danny Alan Johnson; son, Shaun P. Johnson (Pamela); granddaughter, Ebony Black (Donta); grandson, Aaron Johnson (Ashley); great grandchildren, Jaiydan, Lauren, Eli; Father-in-law, Frank Johnson; Mother-in-law, Classie Johnson; Sisters-in-law, Cassandra Boyle (Lee), Kimberly Phelps (Billy), Donna Welch (James), Marcia Taylor (James); Brothers-in-law, Freddie Johnson (Edna), Jackie Johnson (Velma), Perry Johnson (Kelia); Aunts, Dorothy Wood, Patsy Barnes, Brenda Dooling, Sandra Bragdon; a host of nieces, nephews, cousins, extended family, friends and loved ones. To everything there is a season, and a time for every purpose under heaven. Ecclesiastes 3:1

Phyllis Alice Bragdon Johnson was born in Fort Lauderdale, Florida on February 21, 1951. She answered her divine summons at 3:56 p.m. on Tuesday, June 8, 2021 surrounded by her family at Regional One Health Medical Center in Memphis, Tennessee. Phyllis... View Obituary & Service Information

The family of Mrs. Phyllis Alice Bragdon Johnson created this Life Tributes page to make it easy to share your memories.