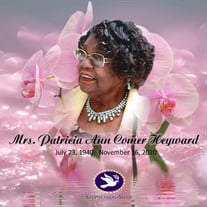 Patricia Ann Comer Heyward was born July 23, 1940 to Parthenia Merriweather and Horace Comer. She departed this life November 16, 2020, in Jackson, TN. Patricia accepted Christ at an early age and united with the Blair’s Chapel C.M.E. Church. In later years she was united with the St. Mary’s A.M.E. Church in John’s Island, SC; where she resided and served faithfully until her health declined. The last three years of her life she was reunited with the Church of her youth, The Blair’s Chapel C.M.E. Church. She was united in holy matrimony to Mr. William Heyward on February 3, 1980. At the time of his death they were married for 37 years. Together they raised three daughters: Sharon C. Moore, Sharon Fludd (deceased) and Maria Diggins. Patricia was educated in Madison County Schools and graduated from West High School as a proud member of the Class of 1959. She later attended NYC Community College. She was employed with the Martha Washington Hotel in New York, NY; from which she retired. She is preceded in death by her parents: Lloyd and Parthenia Bond and Horace Comer, her sister: Gloria J. Taylor and her brothers: Earnest Comer, Sr., and James Comer. Those left to cherish her memories are her daughter: Sharon C. Moore; step-daughter: Marva Diggins; grandchildren: R. Chris (Shunda) Moore, Chelsey R. Moore, Crystal L. (Romie) Gray, and Mima Heyward, all of whom were an instrumental part in her care; great-grandchildren: Adaisha, Ja’Myala, Rhonda, Renayha, Mariah, Keylan, and Romie IV; great-great-grandchildren: Zion and Zi’yana; brother: Rudolph (Essie) Ross; sister-in-law: Viola Comer and a host of devoted nieces, nephews and cousins who were near and dear to her heart

The family of Ms. Patricia Comer Heyward created this Life Tributes page to make it easy to share your memories.

Send flowers to the Heyward family.