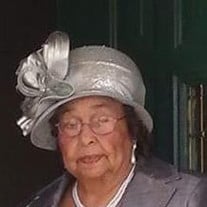 A Time to Be Born...In the beginning was the word and the word was with God and the word was God. The word of God was spoken and Mrs. Ora Mae Juanita Stewart Lewis came forth. She was born on October 19, 1929 in Grand Junction, TN. Mrs. Lewis was the fourth of ten children born to the late Mr. And Mrs. Ephraim and Cora Bell (Lambert) Stewart. "The Lord is my shepherd and I shall not want" At an early age, Ora Mae professed her faith and accepted Jesus Christ as her Lord and Savior at Jones Chapel Missionary Baptist Church, located in Grand Junction,TN. She was educated in the Fayette-Ware School System. Later, Mrs. Lewis joined Home Missionary Baptist Church. At church she was an active member of Circle #4 Missionary Society, serving as Co-chairman for numerous years, and the Decoration Committee. Mrs. Lewis was employed for many years at Porter Cable, but is perhaps best known for caring for children, having ran an in-home daycare for over 10 years. A Time to Plant... Mrs. Ora Mae Lewis was united in holy matrimony to the late F.L."T-Roy" Lewis on April 26, 1955. To this union, they bore one son, Mr. Benjamin Floyd Lewis. A Time to Die...To everything there is a season of which is spent here on Earth, but when the time has come, that which is here on Earth shall be called back into which forth it came. Mrs. Ora Mae Lewis lived an amazing life full of love and family. On November 30, 2016, God called her home at the Jackson- Madison County General Hospital at the ripe age of eighty-seven. She will truly be missed by many friends, family, and the community, but will forever be in our hearts. She is proceeded death by her parents, Mr. And Mrs. Ephraim and Cora Bell Stewart, her husband, Mr. F.L. Lewis, Jr., two brothers, Mr. Willie Stewart and Mr. Lepolian Stewart, two sisters, Mrs. Cora Lee Wright and Ms. Alice Lambert. She leaves to cherish her memory, her devoted son, Benjamin Lewis of Jackson, a special son, Lorenzia "Peter" Walton of Memphis, TN, and special daughter, Erica Rayner; two granddaughters, Erica Lewis and Nakia Lewis and three great- grandchildren, Ayanna Lewis Zuri Lewis, and Zarya Lewis all of Jackson, TN; three sisters, Ms. Mattie Louise Stewart of Grand- Junction, TN, Mrs. Bobbie Nell (Charlie) Walton, and Mrs. Thelma (Walter) Hill both of Memphis, TN; two brothers, Mr. Ozell Stewart and Mr. Charles Baker (Floyd) Stewart both of Memphis, TN; four sisters in law, Mrs. Sallie Mae Woods, Mrs. Rosie Polk both of Bolivar, TN, Mrs. Anne Stewart of Memphis,TN, and Mrs. Agie Louis of Grand Junction, TN along with a host of nieces, nephews, cousins, friends, and other family We loved her but God loved her best.

A Time to Be Born...In the beginning was the word and the word was with God and the word was God. The word of God was spoken and Mrs. Ora Mae Juanita Stewart Lewis came forth. She was born on October 19, 1929 in Grand Junction, TN. Mrs. Lewis... View Obituary & Service Information

The family of Mrs. Ora Mae Lewis created this Life Tributes page to make it easy to share your memories.

A Time to Be Born...In the beginning was the word and the word...

Send flowers to the Lewis family.