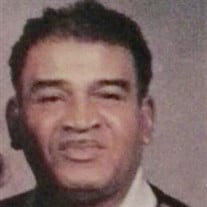 Onna V. Parker was born January 31, 1920, in Huron, Henderson County, TN to the late Will Parker and Laura (Polly) Crook. He departed this life on April 14, 2016 at the Veteran’s Administration Hospital, Nashville, TN. He was preceded in death by his wife, Eula Parker, and siblings Lance Parker, Glee Kizer, Imorwe Hodges, Lester Parker, and Odell Parker. He was a member of Fifteenth Avenue Church of Christ, Nashville, TN. He served in the armed forces during World War II. He often spoke about the hardships of war and how difficult it was to survive in the South Pacific. This journey through Japan, New Guinea, and the Philippines provided memorable moments. He told stories about history, life in the war and being captivated by Geisha. His stories were both humorous and life threatening. Onna learned from his mother that you should never intentionally try to hurt or deceive another person. He spent his life serving and giving to others. Our father enjoyed the annual stew and barbecue celebration with his family, a major event for all in the Henderson County area. His secret recipe for barbecue sauce was extraordinary and set his sauce apart from store brands. He was self made and self reliant. From his education to his career, his skill with every tool that could fashion wood, metal, brick or cement was extraordinary. Our father help restore the North Nashville Germantown community during his employment with Metropolitan Development and Housing Agency. He attended Tennessee State (A&I) and majored in Industrial Arts and Agriculture. He retired from Louisville & Nashville Railroad and later taught school in the Davidson County Public School System. He was united in Holy Matrimony to his late wife Eula Cawthon in March 1946. To this union, five children were born. Two loving children preceded him in death, Al Rochelle Parker and Wylda Jeanne Jenkins both of Nashville, TN. He leaves to cherish one son, Onna V Parker, Jr and daughters, Jacqueline Renee Parker Bowen both of Nashville, TN and Sirella (Dr. Royce) Parker Joyner of Memphis, TN, grandchildren, great grandchildren, nieces, nephews, cousins and many devoted friends. Onna was able to remain at home with assistance from Care Givers Home Care Agency, and his family. He was a great man who did not accept his greatness. Our father was one of the most down-to-earth persons that you could know. His intellect was only matched by his humility. He enjoyed conversation about politics and also loved the life of the mind. For him there was nothing more fun than a passionate debate.Thank you, Dad for being the most incredible father we could have ever wanted. Thank you for making us want to make the world a better place and and showing us a path to do so.

Onna V. Parker was born January 31, 1920, in Huron, Henderson County, TN to the late Will Parker and Laura (Polly) Crook. He departed this life on April 14, 2016 at the Veteran&#8217;s Administration Hospital, Nashville, TN. He was preceded... View Obituary & Service Information

The family of Mr. Onna V. Parker created this Life Tributes page to make it easy to share your memories.

Send flowers to the Parker family.