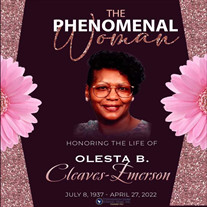 Olesta Cleaves Emerson was born in Fayette, County, TN on July 8, 1937, to the late Eligah and Bessie Cleaves. She was known by many names such as Mama, Granny “O”, Grandma, Madea, First Lady but Christian was the name that she was most proud to be called when she put on Christ in baptism. Sis, Emerson received her early education via Fayette County School System where she and her siblings had to walk dusty roads to get to class. The Cleaves Family moved to Humboldt for better Share-Cropping opportunities, but it was also where they would find better employment opportunities and better education opportunities. She found Domestic work to start her employment journey. Sis. Emerson had a love for God, HIS word, and HIS word in song, which is how she met her husband, James Emerson. They were united in marriage May 2, 1959, and started a family. Employment opportunities included, The City Café, ITT in Milan, TN, the Milan Arsenal, and Eaton Axle Division where she was the first female and first African American female welder for the Humboldt location. She excelled as a welder and did so for many years until her retirement. She showed strength in her ability to take on many trials and/or tasks at once by tending her husbands needs in his sickness simultaneously with tending her daughter`s needs in her battle with breast cancer. She took on another source of employment by caring for Special Needs Adults to compensate and support the need to care for her husband and daughter. Caring for people came very easy for her as she was such a woman of compassion and a desire to help those in need. Sis. Emerson found her ministry in supporting God`s work behind the scenes; never needing to be seen or to be out front. She just wanted to always see the work done properly and as God would want it done. Because of her husband`s ministry, she has been known to feed entire singing groups and choruses all alone and maintain a great reputation for hospitable work. Many don`t know that she had a great sense of humor but would only let it be seen with immediate family or those with which she was very comfortable. She even nicknamed herself “TOMBSTONE TERRITORY” because she was so tough. She had a love for gardening, sewing, and canning; not to even mention her handy work with cooking. Those good ole moist strawberry cakes, chicken and dumplings, sweet potatoes yams, stewed potatoes, cabbage casseroles, and such like, will be greatly missed. Preceding her in death were her husband, James, her daughter Bettye Porter, her bonus son, Anthony Henderson, her bonus granddaughter, Lashonda Owens, her sisters, Lizzie Mae Perry, Myrtle Cleaves, her brothers, E. L. Cleaves, Albert Cleaves, Richard Cleaves and Charles Cleaves. She leaves to cherish her memory, her daughters, Joann Waddell of Memphis, TN, Janice Emerson of Nashville, TN, Casaundra Emerson of Jackson, and a bonus daughter, Helen Buie of Chicago, son-n-law Ben Port, grandchildren, Lamanda, Simone, and Siarra Gillespie, Ashton Jackson, Katelyn Emerson, Christopher Taylor, bonus grandchildren Julian and Jermell Martin, Great grandchildren, Brooklyn Emerson, Leila Gillespie, Amani, Addison, Aryn Taylor and bonus Great-grandchildren Joshua Elam, Jayden Martin, her sisters, Adeline Williams of Memphis, TN, Verleria Taylor of Humboldt, TN, and Mattie Gowens (Calvin) of Lake, CA, Brothers-in-law Harold (Inez), Bennie (Laurine) of Milan, TN, Charles Emerson, Terry Emerson of Humboldt, TN, Joseph Emerson (Carolyn) of Jackson, MS Rosetta Burrow (Johnnie) of Atwood, TN, Sisters-n-law, Clara Boykin of Erie, PA, Rosetta Burrow (Johnnie) of Atwood, TN, Arlene Emerson, Glinda Berry, and Diane Jones (Sam) all of Jackson, Tennessee; and Minnie Emerson of Humboldt, Tennessee. A host of nieces, nephews, cousins and her loving church family at the West Humboldt Church of Christ.

Olesta Cleaves Emerson was born in Fayette, County, TN on July 8, 1937, to the late Eligah and Bessie Cleaves. She was known by many names such as Mama, Granny &#8220;O&#8221;, Grandma, Madea, First Lady but Christian was the name that she was... View Obituary & Service Information

The family of Mrs. Olesta Cleaves Emerson created this Life Tributes page to make it easy to share your memories.

Send flowers to the Emerson family.