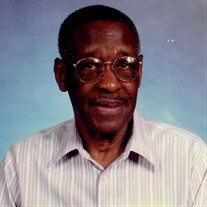 MR. Odis Reams was born on February 9, 1920 to the union of the late J.B. and Lonie (Clay) Reams of Crockett county. He was the fourth and last child born to this union. Mr. Odis was a lifelong member of Midgett Chapel U.M.C. (Lighthouse UMC). He was a Superintendent of Sunday school for many years. Mr. Odis loved people and his church . He volunteered each Sunday to pick up members for Sunday School and Church services. He worked on the Board of Trustees. On many Saturdays you could find him in the church humming a church song and cleaning. He served in many other positions through the years. Mr. Odis remained faithful to his church until failing health slowed him down and eventually stopped many of his activities. He attended Central High School in Alamo, TN. Where he later became employed as custodian and bus driver, retiring after 40 plus years. Odis was united in holy matrimony to the late Nannie B (Raines) Reams. To this union twin daughters were born, Ruth and Naomi. Odis was a World War II veteran. He served in the US Army. He was honorably discharged. He received the EAME Theatre Ribbon with Bronze Stars, Good Conduct Ribbon, and World War II Victory Medal. He enjoyed working in the yard from sun up to past sun down. He loved to play checkers, bingo, and do his own handcrafted designs. He was preceded in death by his parents J.B. and Lonnie Reams, his wife Nannie B Reams, five brothers, Elberth, Arthur, Thomas, Sylvester, and Johnny Reams, and one sister, Lola James, and one granddaughter, Constance Johnson. He leaves a legacy of love and family to cherish his memory.; daughters Ruth Reams, Naomi Stewart of Toledo, Ohio; two brothers, Melvin Reams of Alamo, TN. Willie Reams of Toledo , Ohio. one sister, Jerle Ward of Alamo, Tennessee; one granddaughter; Pamela Underwoood of Toledo, Ohio. great- grandson, Joshua Odis Johnson of Philadelphia , PA. three great granddaughters; Patrice Underwood, Tomisha Underwood, of Atlanta, Georgia, and Monique Underwood of Las Vegas. four great-great granddaughters, Mayia and Marie Moon of Atlanta, Georgia,Kylie and Aubrie Underwood of Las Vegas, NV. nieces, nephews, and cousins; other relatives and friends.

MR. Odis Reams was born on February 9, 1920 to the union of the late J.B. and Lonie (Clay) Reams of Crockett county. He was the fourth and last child born to this union. Mr. Odis was a lifelong member of Midgett Chapel U.M.C. (Lighthouse... View Obituary & Service Information

The family of Mr. Odis O. Reams created this Life Tributes page to make it easy to share your memories.

Send flowers to the Reams family.