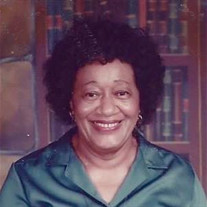 Myrtice Beatrice Brooks Woods was born to the union of Will Brooks and Mamie Elam Brooks on December 4, 1925 in Milan, Tennessee. She was the second born of two children born to this union. Her brother Avery T. Brooks preceded her death, leaving the parents time to give undivided love to Myrtice. She departed this life on July 1, 2016 at Behavioral Healthcare Center peacefully sleeping during the early morning hours. She leaves a legacy of educational excellence, concert and gospel musical ability that she willingly shared. She especially loved attending and participating in Sunday School. As a young child, she, along with her parents attended Phillips Chapel Christian Methodist Episcopal Church, where she was converted to Christianity at a very age. Here she remained until her death, a member for over eighty years. She was an active member serving on the Stewardess Board and sharing her musical talent as well when asked. Myrtice spent her entire life in Milan, Tennessee and began her education at the Gibson County Training School later renamed Polk- Clark. She graduated in 1944 and entered Lane College in Jackson, Tennessee where she earned a Bachelor of Arts degree. Her major area of specialization was Social-Sciences with miner field in Music, with emphasis on piano. She was a renowned classical pianist and loved gospel music. Myrtice enjoyed sharing her musical talent with all that she met along the way. She was a member of the College Chorus, a Golden Life Member of her sorority, Delta Sigma Theta Sorority, Inc. Jackson Alumnae Chapter. At Lane she met Henry Woods, a WWII Veteran student. Myrtice and Henry were happily married until his death. No children were born to the union. Upon graduation from Lane College in 1948 she began her teaching career at Gibson County Training School. She taught 4th grade and accompanied the School Glee Club. She held membership in MEA, TEA, and NEA. After years of dedicated service to children she retired from K.D. McKellar School June 1, 1988. She leaves to mourn her passing, her very special family of more than twenty –five years, Bobby and Myra Barnett of Humboldt, a college friend Dorothy Marie Ragland of Los Angeles, California; several cousins, Theresa Witt and children of Louisville, Kentucky, Lawrence Collins of Memphis, TN, Mary Elyse Pirtle, Shirley Wright , Norma Gilbert of Indianapolis, Indiana, Martha Sue David of Milan and friends.

Myrtice Beatrice Brooks Woods was born to the union of Will Brooks and Mamie Elam Brooks on December 4, 1925 in Milan, Tennessee. She was the second born of two children born to this union. Her brother Avery T. Brooks preceded her death,... View Obituary & Service Information

The family of Mrs. Myrtice Brooks Woods created this Life Tributes page to make it easy to share your memories.

Myrtice Beatrice Brooks Woods was born to the union of Will Brooks...

Send flowers to the Woods family.