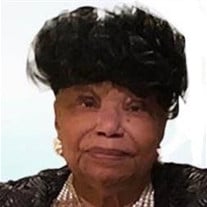 A fierce, feminine force of faith, Barbara Austine Dickerson, was born August 27, 1937, Bells,Tennessee, United States of America; the first child born to Eddie and Edith Dickerson and a new member of a society renewing itself. In 1937, Franklin... View Obituary & Service Information

The family of Mother Barbara Austine Dickerson Wells created this Life Tributes page to make it easy to share your memories.

Send flowers to the Wells family.