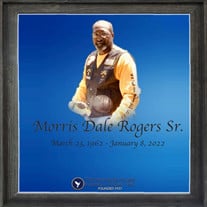 Morris Dale Rogers Sr was born on March 23, 1962, in Jackson, TN to Gladys Rogers and was raised alongside three brothers: Chardier Mondan Rogers, Artist Lee Rogers Sr, and Victor Tyrone Rogers. He attended Jackson Central Merry High School and graduated in 1980. The following year, he enlisted in the United States Marine Corps and attended basic training in Camp Lejeune in North Carolina. Those that knew Dale knew of his love for guns, motorcycles, and trucks. Dale was a proud veteran having served in the United States Marine Corp and the United States Army and was honorably discharged from both branches of service. He was a member of the National Rifle Association and served in the Jackson chapter of the Buffalo Soldiers Motorcycle Club. Dale was the owner of Serious Gun Training, where he instructed individuals on gun safety and assisted them in obtaining their handgun carry permits. In his spare time, he enjoyed working on cars, playing the bass guitar, and spending time with his grandchildren. Dale Rogers will be sorely missed by his loved ones, and we will hold memories of him in our hearts. He married Rosaland Rogers on January 10, 1985, and their union produced three children: Cassey Rogers, Morris Rogers Jr (Madison), and Kristina Rogers. Morris Sr and Rosaland also share three loving grandchildren: Riley Rogers, Ryder Rogers, and Casey Rogers. He was preceded in death by his older brother Chardier Rogers, grandmother Mary Tomlinson Estes, and grandfather Howard Estes. He leaves behind a host of loving nephews, nieces, cousins, and other extended family members.

The family of Mr. Morris Dale Rogers Sr. created this Life Tributes page to make it easy to share your memories.

Send flowers to the Rogers family.