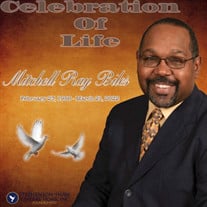 Mitchell Ray Biles was born on February 27, 1956 to the late Betty Biles in McMinnville, TN. He was her only child. He was married to Vicki Ramsey Biles on June 27, 1978. On March 21, 2022, Mitchell Biles was called home at the age of 66. Mitchell is a man who has been loved and cherished by many people over the years. He was someone who was looked up to, someone who was admired, and someone to be proud of. He was honorable, kind, fair, charismatic, loving, and giving. He had a way to make you feel heard before he answered you back with his words of wisdom. He played a variety of roles: husband, father, granddaddy (also known as “Scooter Bones” by his grandchildren), mentor, and great friend. Mitchell is well known for his many years of service at Fred’s in Jackson, TN. He was last employed at Robinson Toyota as a salesman. Mitchell accepted Christ as his Lord and Savior when he was baptized at the Middleton and Payne Street Church of Christ. He was a faithful member and served as Deacon of Education at the East Jackson church of Christ. Mitchell not only played a valuable part in the church, he also participated with the community. He was a member of the Optimus Club and served on the Board of Directors at the Jackson Christian School. Mitchell was preceded in death by his mother, Betty Biles; and grandparents, Eural and Leora Biles. He leaves to cherish his memory: his beloved wife, Vicki Biles of Jackson, TN; his children, Cherlisa Biles, Christopher Biles, Chernae’ (Tavaris) Anderson; his grandchildren, Jaden Hayes, Briana Sowell, Gabrielle Reynolds, Demetrius Batey, Adrian Anderson, Ava Anderson, and Caiden Biles; sister-in-law, Rita Ramsey; nephew, Torrell Ramsey; and a host of other relatives and friends.

Mitchell Ray Biles was born on February 27, 1956 to the late Betty Biles in McMinnville, TN. He was her only child. He was married to Vicki Ramsey Biles on June 27, 1978. On March 21, 2022, Mitchell Biles was called home at the age of 66. Mitchell... View Obituary & Service Information

The family of Mr. Mitchell Ray Biles created this Life Tributes page to make it easy to share your memories.

Send flowers to the Biles family.