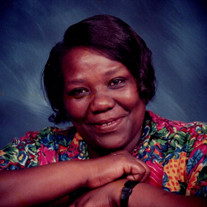 Mrs. Mildred M. &#8220;Dot&#8221; Pirtle Johnson was born on December 14, 1946 in Hickory Valley, Tennessee to the late Raymond Sr. and Mildred Pirtle. She professed a hope in Christ at a very early age in Hardeman County. She united with... View Obituary & Service Information

The family of Mrs. Mildred "Dot" Pirtle Johnson created this Life Tributes page to make it easy to share your memories.