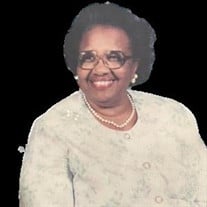 Mildred was born in Clarksburg (Carroll County) Tennessee, on March 2, 1928, to the late Mrs. Marie E. Parker Buckley and Mr. Luther Buckley. She was the eldest of five children born to that union. She professed a hope in Christ at an early age and joined the Clark Street Missionary Baptist Church in Huntingdon, TN. Mildred worked in many auxiliaries of the church, thus, serving as a member of the Choir and the Missionary Society (Mother Board) and remained a faithful member until her health failed Mildred attended the public schools in Carroll County, Tennessee. On August 10, 1946, Mildred was united in Holy Matrimony to Odell Bell. To this union two sons were born On Friday, May 1, 2020, the Angel of Mercy visited NHC Health Care in Milan, Tennessee and called to rest the bright and loving spirit of Mildred I. Bell. Surrendering from her earthly life, as a loving mother grandmother, great-grandmother, sister, aunt, cousin, and dear friend. Her soul winged its flight from this world of sin, sorrow, and pain to a place of eternal rest. Preceding her in death were her parents; two sisters: Shirley Buckley and Pauline Johnson; and two brothers: John A. Buckley and L. B. Taylor. Mildred’s Christian life was as the fragrance of a beautiful rose, and her influence will forever live in whatever places she has resided. She was one of God’s gentle women upon whose head rested a crown studded with sparkling jewels of her golden deeds. Her smile brightened anyone’s day, and her kindness was simply amazing. She, Odell, John, and Mae Henry were always calling and sharing their garden of vegetables and fruit with everyone they knew. Mildred leaves to cherish her precious memory, two loving sons: Dr. Kenneth Wayne (Nickie) Bell of Dover, DE; and Dwight Elliott Bell of McLemoresville, TN; One sister: Lillie M. Thomas of Huntingdon, TN; and one brother: Preston (Rebecca) Buckley of Warrenton, NC; four grandchildren: Michellene (Rev. Ronald) Ballard, Jr., and Dr. Nicole (Michael) Rogers – both of Dover, DE; Chassidy Bell of Jackson, TN; and Raven Bell of Atlanta, Georgia; an adopted granddaughter, Naquana Diggs of McKenzie, TN; three great-grandchildren: Ayanna N. Waters and Jai A. Smith of Dover, DE; and Taj Tillery of Atlanta, GA; and a host of nieces, nephews, cousins, and friends.

Mildred was born in Clarksburg (Carroll County) Tennessee, on March 2, 1928, to the late Mrs. Marie E. Parker Buckley and Mr. Luther Buckley. She was the eldest of five children born to that union. She professed a hope in Christ at an early... View Obituary & Service Information

The family of Mrs. Mildred I. Bell created this Life Tributes page to make it easy to share your memories.

Mildred was born in Clarksburg (Carroll County) Tennessee, on...

Send flowers to the Bell family.