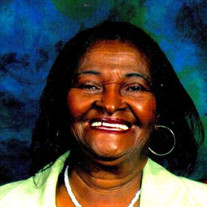 Mattie L. Woolfork was born January 25, 1929 in Gibson County Tennessee to the late Wallace and Jennie Sturdivant. She went to be with the Lord and Savior on October 26, 2020 at Jackson Madison County General Hospital surrounded by her family. She professed a hope in Christ at an early age and united with Hope Hill C.M.E. Church in Sitka, Tennessee where she remained a devoted and faithful member until her passing. She not only served at Hope Hill C.M.E. Church but also at the Hudson Chapel C.M.E. Church in Medina, Tennessee known as “The Medina Circuit.” She was known by her family and the people she came in contact with as a loving, caring and sharing person. She loved talking and never met a stranger that she couldn’t strike up a conversation. Cooking was her passion and she always prepared Sunday dinner at her home. Her family (children, grandchildren, nieces, nephews, church family and all) was always welcome to partake, she always cherished the gathering of family and friends. She was the champion maker of strawberry cakes, macaroni and cheese, homemade ice cream, boiled custard, and many more delicious entrees that her family and friends looked forward to. “Momma Lee” as she was affectionately called by her grandchildren will be greatly missed by all. Her employment consisted of Milan Army Ammunition Plant and NHC Nursing Home both in Milan, Tennessee and Medina Post Office in Medina, Tennessee. She was united in Holy Matrimony on May 15, 1948 to the love of her life, the late Eugene Woolfork this union for over fifty plus years. From the union seven children were born: David, Catherine, Charles, Johnny, Don, Thomas, and Diane. She was preceded in death by her parents, grandparents, husband Eugene Woolfork, four brothers: Burton, Bennie, George and Jesse Sturdivant, five sisters: Mittie Isabel, Louise Algie, Lucille Smith, Birdie Fly and Mildred Gills, one daughter, Catherine Woolfork, three sons: Don, Thomas and Charles Woolfork, and one great-grandson: Ashton Sealey and one great-great grandson: Carlos Taylor Jr. She leaves to cherish her memories three children: David (Kathy) Woolfork, Johnny Woolfork and Diane Taylor; one sister-in-law: Mattie Watson, sixteen grandchildren, twenty-eight grandchildren and a host of nieces, nephews, and other relatives.

Mattie L. Woolfork was born January 25, 1929 in Gibson County Tennessee to the late Wallace and Jennie Sturdivant. She went to be with the Lord and Savior on October 26, 2020 at Jackson Madison County General Hospital surrounded by her family. She... View Obituary & Service Information

The family of Mrs. Mattie Lee Woolfork created this Life Tributes page to make it easy to share your memories.

Send flowers to the Woolfork family.