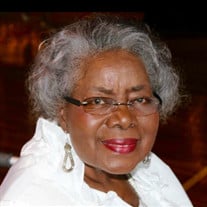 Mattie Marie Clifford Mickens was born September 12, 1932, in Chester County, TN. She was the youngest child of the late Andy H. and Ollie Mae Cooper Clifford. She passed from this life on Saturday, June 17, 2017 following a lengthy illness. She was united in holy matrimony to the late Eddie C. Mickens on January 6, 1962. During their 29 years of marriage, two children were born, Jennifer and Jenoa. Mattie was baptized at the Oak Grove Church of Christ at the age of 13 under the leadership of Bro. T.H. Busby. When her health began to fail, she moved to Memphis to be close to her daughters and attended Quince Church of Christ, where Bro. Nokomas Rodgers is the minister. She was obedient and faithful to the Lord Jesus Christ until God called her home. She also had a love for music. Mattie sang first soprano with the Lane College Glee Club. She also assisted organizing and directing the Oak Grove A’capella Chorus. She also enjoyed attending “singouts” as long as her health allowed. Mattie attended Christian Women’s conferences and lectureships in various cities over the years. Her support of Christian education was demonstrated by many years as she worked to keep fundraising active for Southwestern Christian College. Mattie was a true fashionista. She always made sure to look her best whenever she left home. Mattie loved entertaining family and friends. She could talk for hours about church, current events and family history and could easily recollect how families were related. She especially looked forward to her nightly conversation with Cousin Betty Clifford. Mattie graduated from Chester County Training School, then graduated from Lane College with a Bachelor’s Degree in Special Education. She had a passion to help and improve the lives of children with special needs. She obtained a Master’s Degree in Special Education from Memphis State University. Mattie was employed by the Chester County Board of Education as a Teacher and Director of Special Education; she retired after 45 years of service. She served on the State Board with Lt. Governor John Wilder in regards to Special Education. Mattie was a member of the Phi Delta Kappa Sorority, Retired Teachers’ Association, and the Town and Country Club CFE. Mattie and Eddie C. opened their home over the years to ministers, singing groups, relatives and friends to eat and fellowship: Dressing, garden vegetables, and pecan pies were some of her specialties. Mattie was preceded in death by her parents, Andy and Ollie Mae Clifford; her husband, Eddie C. Mickens, and siblings: Clyde O’lene Clifford, Earlee Gray, Cooper Clifford, Sue Nell Young, Louise Ross, James Clarence Clifford, Cleora Hart, and Leora Frye. She leaves to cherish her memories: two daughters, Jennifer Mickens-King and Jenoa Mickens of Memphis, TN; grandson, Michael Jayden King; two godsons, Myron J. Fulton of Henderson, TN; Fred Norman “son” of Dallas, TX; nieces: Bettye Johnson of Indianapolis, IN, Pat Howie (Douglas) of Terrell, TX, Angeline Black of Jackson TN, and Doticy Clifford of Indianapolis, IN; nephews James Clifford of Memphis, TN and Michael Clifford of Capitol Heights, MD, cousin/nieces; Lue Helen Martin, Sandra K. Weddle both of Jackson, TN, and Linda Belew of Lexington, TN and a host grand/great nieces and nephews, relatives and friends.

Mattie Marie Clifford Mickens was born September 12, 1932, in Chester County, TN. She was the youngest child of the late Andy H. and Ollie Mae Cooper Clifford. She passed from this life on Saturday, June 17, 2017 following a lengthy illness. She... View Obituary & Service Information

The family of Ms. Mattie Mickens created this Life Tributes page to make it easy to share your memories.

Send flowers to the Mickens family.