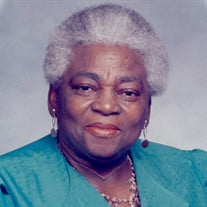 Mary Alice Sain, was born on February 11, 1920, in Madison County, Tennessee, to the late Clara Roberson Horn. She was lovingly adopted by the late Mann and Mary Askew. She attended the Madison County School System, graduating from Merry High School in 1938. While in high school, she was said to have been a pretty good athlete, especially in basketball. After graduation, much of her time was spent doing domestic work. She was united in holy matrimony to the late Phillip David "Jack" Sain. To this union one daughter was born Mary Elizabeth was born. She started attending Macedonia Missionary Baptist Church when she could barely walk. When a neighborhood friend Ollye "Brown Sugar" Curry started bringing her to church. She has been there every since. At a very early age she accepted Jesus Christ as her personal Savior and was a very active member of Macedonia for close to 90 years. She remained active until her health began to slow her down, yet still attended until she could no longer manage. She loved her Macedonia Church family in a very special way. she served faithfully on many committees of the Church and in the community. She was a member of the Susie Jackson Circle, Sunday School and Kitchen Committee. She served and was president of the Missionary Society as well as serving on the City Wide Missionary Society. She also served the Church as Treasure/Secretary and worked faithfully with the Obion River District and was a member of the Golden Circle (Eastern Star). Always know for her culinary skills, she was more than just a "great cook". She had m any interest, She and her husband were always known for sharing their modest home with families in need, college students, friends, the sick and the elderly. They were forever sharing their love of gardening with others. She had a great appreciation for gardening, canning vegetables and growing flowers. She also enjoyed sewing, quilting and ceramics. She loved to travel, whether it was by train, plane, or car she was on the go. Her husband affectionately called her "Roadmap" She leaves to cherish her memories her daughter: Mary Elizabeth (Maurice) Hunt; grandson Micheal; four great-grandchildren; special childhood cousins: Bertha Cooper of Ripley, Tennessee and Laura Valentine of Monrovia, CA; special friends: Arva Lee Hildreth, Mattie Cathy and Mattie Millikin.

Mary Alice Sain, was born on February 11, 1920, in Madison County, Tennessee, to the late Clara Roberson Horn. She was lovingly adopted by the late Mann and Mary Askew. She attended the Madison County School System, graduating from Merry High... View Obituary & Service Information

The family of Mrs. Mary Alice Sain created this Life Tributes page to make it easy to share your memories.

Send flowers to the Sain family.