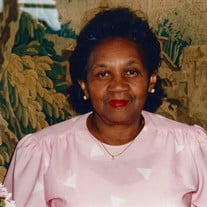 Mrs. Mary Virginia (Moses) Murray, affectionately known as “Gee Gee”, was born on March 1, 1923 in Brownsville, TN to Charlie T. Moses Sr. and Izetta Chatman Moses. She departed this life on November 25, 2015 at Jackson-Madison County General Hospital. She was a Christian woman, very loving and giving, and always there when you needed her. She was educated in the Haywood County and Madison County school systems, graduating from Merry High School in 1944 and from Lane College in 1949. She worked for a number of years at Jackson-Madison County General Hospital as a Licensed Practical Nurse. She also served as the nurse for the National Youth Sports Program at Lane College for several years. After retirement, she remained active. She was a founding member of Jackson Area Minority Mentor Nurses and a charter member of the Golden Youth Do Da Band and Tip Top Tappers. She also traveled extensively, including tours to Europe and Australia. She was a faithful member of New Greater Bethel AME Church, where she served in various capacities, including the Pastor’s Aid Club and Steward Board. She was preceded in death by her parents, her sister Lucille Jackson and brothers William O. Moses and Charlie T. Moses Jr. She leaves to cherish her memory her daughters Deborah L. Murray and Dr. Pamela D. Murray, both of Jackson, TN. Nephew Neville Murray (Karen) of Memphis, TN. Foster daughters Joyce Polk, Carmen Starr (Robert), and Denise Woods. Devoted caretaker Patricia Kemp. She will also be missed by the Southern and Pinson families, and the families of Jackson Recreation and Parks, the Regional One Emergency Department, and the Jackson General Hospitalists, as well as a host of other relatives and friends.

The family of Mrs. Mary Virginia "Gee Gee" Murray created this Life Tributes page to make it easy to share your memories.

Send flowers to the Murray family.