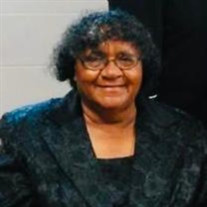 The sun rose on the life of Mary Lucille Harris on November 21, 1943. She was born to the late Odartha Luter and Mary Lee Wilson in McLemoresville, TN. Her sun set on Sunday, October 25, 2020. She was a member of Wingo Missionary Baptist Church... View Obituary & Service Information

The family of Mrs. Mary L. Harris created this Life Tributes page to make it easy to share your memories.

The sun rose on the life of Mary Lucille Harris on November 21,...

Send flowers to the Harris family.