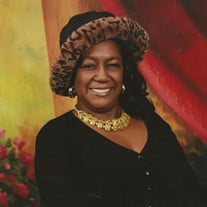 Marva Marie Bledsoe was born June 13.1946, in Mclemoresville, Tennessee to the late Ardell and Curtis Bell. She accepted Christ at an early age and remained a faithful warrior. She was a member of Greater Enon Missionary Baptist Church, where she once served on Pastor’s Aide Committee, Young Matrons, Missionary Department, Kitchen Committee, and a member of the Gospel Choir. She attended Webb High School in McKenzie, Tennessee. She was always dressed to the hilt, was famous for her red lipstick. And was often referred to as Foxy Brown or Diva. She had a beautiful smile and was always a lot of fun to be around. Her sense of humor brightened many people’s day. She was always caring and would help anyone in need. Her outgoing personality, wonderful smile, and laughter will always be missed. She was an excellent cook, famous for her chow, chow, and loved to garden and raised beautiful flowers. She loved her kids and grandkids and we loved her. She loved for her kids to call her Momma. Her career began as a teacher’s assistant for children with learning disabilities at MTA in Atwood. She then worked as a supervisor at the Wilker Brothers in McKenzie, went on to become a supervisor at Brown Shoe Company, a supervisor at Wen-Sue, and then a supervisor at Nestaway where she retired. She then worked part-time at Cody’s in McKenzie. She was joined in Holy Matrimony to H.B. Adkisson; to this union there were three children. She was later married to Feron Bledsoe until his death. She departed her loving family on Nov. 3rd at JMCGH. She was preceded in death by her Sisters Latisha Bell, Lula Bell, and Brothers Robert Frank Bell, Jimmy Bell, and James Bell. She leaves to cherish her memory a sister Esther Godwin from Chicago, Illinois, three children: Kim (Riley) Webb, Rodney Adkisson, and Randall Adkisson; grandchildren, Alexanderea Bell, Ashley Adkisson, Montell Adkisson, and Alleyah Adkisson, and Brittany Webb. Brother – in-law, Sister in law and host of nieces and nephews. A friend, James L. Milton, and her girlfriends for over 30 years.

Marva Marie Bledsoe was born June 13.1946, in Mclemoresville, Tennessee to the late Ardell and Curtis Bell. She accepted Christ at an early age and remained a faithful warrior. She was a member of Greater Enon Missionary Baptist Church, where... View Obituary & Service Information

The family of Ms. Marva Bledsoe created this Life Tributes page to make it easy to share your memories.

Send flowers to the Bledsoe family.