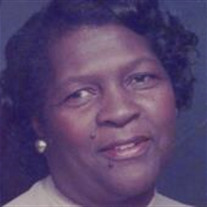 Her beautiful journey has just begun. Life holds so many facets and this earth is only one. She is now at peace from this world’s sorrows and tears. She’s with familiar faces she’s longed to see for years. It’s the place of promise to those who believe and with the love of Christ, she’s been received. She’s now joined the cloud of witnesses who are cheering us on and is loving her new life; her new home. She lived long and waited patiently. Now, the time has come to reap and see the King of Glory and life eternally. Louise Cooper Freeman was born on April 28, 1925 in Haywood County, TN and was the 9th of 10 children born to the late Noah and Dora Cooper. She transitioned into glory on April 5, 2017 at the age of 91. Mrs. Freeman was educated in the Haywood County schools and was a member of St. Paul Missionary Baptist Church in Brownsville, TN. It was there where she accepted Christ at an early age and served faithfully until marrying the late Rev. L. E. Freeman and moving to Jackson, TN. Louise Freeman worked for Mission Convalescent Home and retired in 1991 after 25 years of dutiful employment. She was also very active and committed to the ministries she attended. In the 1960’s, she attended American Baptist Theological Seminary Extension in Jackson and was a life- long, devout member of the New Era Association. Throughout the years, she served tirelessly as Sunday school teacher, choir member, finance clerk, missionary society member and more notably, pastor’s wife. She gladly served on many other committees and or auxiliaries / where needed and was known to be a willing vessel. In her later years she resided in Decatur, IL where she was a member of Greater Northside Missionary Baptist Church and served on the Mother’s Board until her health dictated otherwise. Louise Freeman leaves to cherish her memories, 5 sons and 1 daughter: Rev. Jimmy Waddell (Paulette), Erwin Freeman (Doretta), Marcus Freeman (Sharon) of Decatur, IL; Michael Freeman of Detroit, MI; Rev. Ronny Freeman (Iona) and Nora Freeman of Jackson, TN; 18 grandchildren, 34 great grandchildren; and a host of nieces, nephews, relatives and family friends. Preceding her in death are her husband of 45 years, Rev. L. E. Freeman; a son, Elbert Waddell and her parents and siblings.

Her beautiful journey has just begun. Life holds so many facets and this earth is only one. She is now at peace from this world&#8217;s sorrows and tears. She&#8217;s with familiar faces she&#8217;s longed to see for years. It&#8217;s the... View Obituary & Service Information

The family of Ms. Louise Freeman created this Life Tributes page to make it easy to share your memories.

Her beautiful journey has just begun. Life holds so many facets...

Send flowers to the Freeman family.