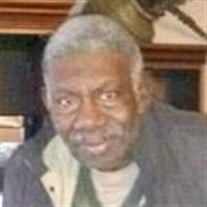 A time to be born: Lorenza Smith was born on July 4,1937 in Denmark, Tennessee to the late Ella Wee Jackson and the late Johnnie D. Smith. He was raised by his mother and grandfather, the late Eddie B. Chapman. A time to plant: By the Grace of God, he accepted Jesus Christ as his Lord and Savior at the age of eleven and he joined the body of Christ at St. John #2 MBC, Denmark, Tennessee. He believed in education and encouraged everyone to learn something, know something and be something, starting with knowing the word of God. When asked what was his favorite scripture, he responded “All of God’s words are important to me.” Bro. Lorenza Smith graduated from Denmark High School Class of 1955 where he excelled in academics as well as athletics. He was determined to pursue a higher level of education. He worked tirelessly to pay for school and completed his goal by graduating from Tuskegee University with a B.S. Commercial Dietetics in the Class of 1962. A time to Laugh/A time to Dance: Bro. Lorenza met his love and wife to be while attending Tuskegee December 1961. One year later, they were united in marriage on December 23,1962. He was a devoted husband and father of two daughters, Venneisa (Smith) Williams and Ladonna Smith. Bro. Smith worked in his community as a coach, mentor and advocate for civil rights. He started a Denmark Youth Community Baseball Team that played surrounding counties. He marched in the 60’s and was one of three to interrogate Sculley’s Golf Course in 1966. If you remember only one thing about Lorenza Smith, remember he was truly a man after God’s heart. Bro. Smith, worked in the church faithfully as a Sunday School teacher, superintendent of Sunday School, Trustee and Deacon. He placed God first, Family second, followed by Church and Community; Loving the Lord with all of his-body, heart, mind and soul. He sought to know the Lord and to do God’s will in all things and remembering “For all have sinned, and come short of the glory of God;” Romans 3:23. He showed his love by working, serving and praying for his family, church and community. A Time to Die/A Time to Mourn: He loved God openly and served God faithfully until his health failed. Once he could no longer serve the Lord in body, he never forgot his Lord and Savior in Spirit. As words faded away, he never forgot to call on the Lord to Give Him Mercy. On August 8, 2017, Lorenza Ivory Smith transitioned to his heavenly home, into everlasting joy, peace and happiness. He leaves to cherish his memory, his loving and faithful wife, Anita (Foster) Smith; two daughters, Venneisa (Wellington) Williams Jonesboro, GA and Ladonna Smith, Forest Park, GA; two sisters, Elizabeth (Earl) Norah, St. Louis, MO and Flora Bell Gander, Jackson, TN; one brother, Robert Steve Transou, St. Louis, MO; In Laws- Joseph and Catherine Foster, Tuscaloosa, AL, Benjamin and Evelyn Walton, Champaign, Ill, Cleveland and Von Foster, Tuscaloosa, AL and Brenda Foster, Champaign, Ill; and a host of nephews, nieces, cousins and friends.

A time to be born: Lorenza Smith was born on July 4,1937 in Denmark, Tennessee to the late Ella Wee Jackson and the late Johnnie D. Smith. He was raised by his mother and grandfather, the late Eddie B. Chapman. A time to plant: By the Grace... View Obituary & Service Information

The family of Mr. Lorenza Smith created this Life Tributes page to make it easy to share your memories.