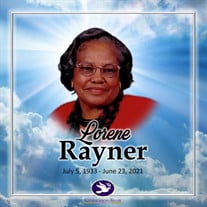 Mother Lorene McGoughy Rayner is survived by husband of 68 years, M. C. Rayner, son Melvin Clay (Bobbie Sue) Rayner, Jackson TN., daughters, Gloria Williams, Nashville, TN., and Brenda (Charles) Garrett, Atlanta, GA. Shirley Jean Moore, daughter and sons Larry Darnell Rayner and Willie Lee Chandler all preceded her in death. Mother Lorene was born to the parents of John McGoughy and Mattie (Bessie) Ross in Okolona Mississippi, July 5, 1933. From this union she leaves to mourn a sister, Ellen McGoughy. The following sister and brothers also preceded her in death; Mildred Brown, Tommy McGoughy, Nathaniel McGoughy, and John McGoughy. A host of grandchildren, great-grandchildren and great, great-grandchildren, nieces, nephews, and friends are mourning her passing. Mother Lorene accepted Christ as her Lord and Savior and was a very faithful member of the East Jackson Church of Christ where she served of the tutorial ministry, food ministry and visitation ministry until her heath began to fail. Prior to moving to East Jackson Church, she was converted by Minister W. H. Vance, after which she led her family to Christ. In the early years of life, she enjoyed playing basketball, was co-owner of the Rainbow Grill. She looked forward to preparing lunches at Whit Moses Lumber Company, and she retired from Quaker Oats after many years. She was famous for her lemon meringue pies, easy going personality, encouraging words, and uplifting demeanor. She was a very devoted wife and mother. During her illness she was most concern about sending her contribution to church, wearing her wedding ring, and who is taking care of M.C. Mother will be greatly missed by everyone who knew and loved her.

The family of Mrs. Lorene McGoughy Rayner created this Life Tributes page to make it easy to share your memories.

Mother Lorene McGoughy Rayner is survived by husband of 68 years,...

Send flowers to the Rayner family.