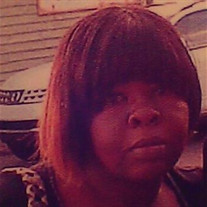 On November 25, 1964, Letitia "Renee" Stitts Hartshaw entered this earthly life to the late Ernestine "Tiny" Stitts Brinkley and Billy Holliday. She departed this life on September 30, 2015. At an early age she professed a belief in God. She... View Obituary & Service Information

The family of Ms. Letitia "Renee" Stitts Hartshaw created this Life Tributes page to make it easy to share your memories.

Send flowers to the Hartshaw family.