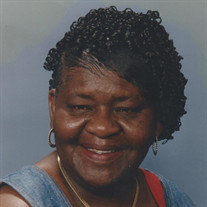 Ms. Leora Douglass-Taylor began this life on July 20, 1936 in Haywood County, TN to Richard Nichelson and Julie Mae Douglass. At the age of three, Mr. Willie E.C. Douglass became a father figure and raised her until her adult life. She Departed... View Obituary & Service Information

The family of Mrs. Leora Taylor created this Life Tributes page to make it easy to share your memories.

Send flowers to the Taylor family.