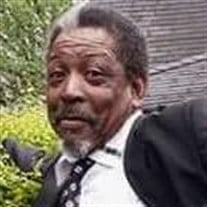 Lee Junior James was born on June 8, 1958 to Mr. Lee Quitin James and the late Fannie Sue Taylor in a little town called Jackson Tennessee. He accepted Christ at an early age in Jackson, Tennessee Lee Junior was a strong minded man and believed that he had to work hard every day so that he could provide for his family. Lee Junior lived in Jackson, Tennessee where attended Jackson Central Merry High School. He also worked at Lane College for a period of time. Lee Junior did a lot of side jobs just to keep busy and help those that needed help. Being the dedicated person that he was, no matter what the weather, day or time, or his feet hurting, he made sure he was at work every day and did not leave work until the job was completed. He was a funny man and every time you saw him, you knew he was about to say something funny that would make you laugh at him. He was a family man and made sure that he took the time for family and friends. Lee Junior was preceded in death by his mother Fannie S. Taylor (Epperson), Step mother – Mary James, Brother- Frederick Tyrone James, Brother- Marvin Dennis Taylor, Brother – Johnny Taylor, and Sister- Pamela Jones. On Monday November 14, 2016, God saw that Lee Junior was ready to go to glory land. He came down and brought him to a better place. He will forever be missed and loved by his loving father Lee Quintin James, and three loving children, Christy James and Chantel James all of Jackson Tennessee; five sisters: Ermateen James, Annie Ernest Merriweather, and Mary James all of Jackson, Tn. Lillie Taylor of Humboldt, Tn. and Linda (Steve) Watson from Gary Indiana; three brothers: Efrem James and Rev. Jerry (Gloria) Epperson both of Jackson, Tn and Sammie Taylor of Gary, Indiana. Special aunts/uncles: Octabia Jones, Donna Davis, Wiley Jones, Ernest Epperson, and Frankie Jones; sister and brother in laws, his special grandchildren and a host of relatives, uncles, aunts, and friends.

The family of Mr. Lee Junior James created this Life Tributes page to make it easy to share your memories.

Send flowers to the James family.